You can’t help but be intrigued by a phrase which starts ‘Hoc hic misterium…’.

Ever since we first saw the house I’d been intrigued by a massive sticker adhered to an old piece of wood which was being used to retain hay in the pre-renovation barn, and which now lays discarded to the side of the main house.

Yesterday I saw it again, took a photo, and thought; ‘I must see what that Latin motto actually means’. Was it a badge for a local football club? Was it something to do with donkey husbandry? Or, was it something far more mysterious like a secret society? 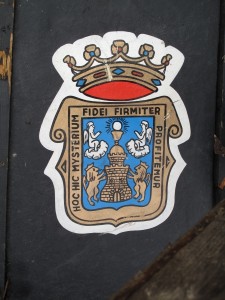 My Latin is less than ropey, bordering on the non-existant, and far more ropey than my gradually improving Spanish of which a new word each day helps me talk to the builder, although sadly most of the words that I am learning are building terms.

This morning while I again waited patiently for the Landrover parts, which the nice lady from DHL assures me will be delivered today, I thought it time to broaden my knowledge.

The motto reads ‘Hoc hic misterium fidei firmiter profitemur’ which literally translates to; ‘Here is the mystery of faith that we strongly profess’. A few seconds on google tells me that it is the motto of Lugo, the city and the province and of the Kingdom of Galicia. As we are in the province of Lugo then I guess it is fair enough.

This entry was posted in Barn Renovation and tagged Barn, Galicia, lugo. Bookmark the permalink.