I’m not feeling particularly proud of myself, in fact I am more than a little bit embarrassed.

Not the nice kind of letter granting our Obras Mayores planning permission for the barn, but the nasty kind from the ‘Centro de Tratamiento de Denuncias Automatizadas’ of the ‘Ministerio del Interior’. Denuncias isn’t a nice word, and I knew that it wasn’t going to be good news before I opened it for it had a red sticker on the outside, and red stickers are very rarely an indicator of good news. 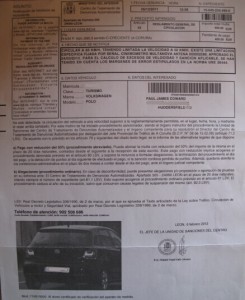 My mind filled with questions; It’s not for me! That wasn’t me! How on earth am I going to sort this out?

Then reality dawned. When Mother came to visit in December I hired a car because the Landy was being a bit ‘fragile’. We went to Santiago de Compostela for a quick visit and a bit of lunch, and I recognised the registration number on the photograph. It was me after all!

Twenty years after my one-and-only previous speeding conviction (for averaging 95 mph on the motorway in a BMW 320i whilst being followed for 8 miles by a marked police car) I’d got a second, and this one was going to cost me €400.00 (reduced to €200.00 if paid within 20 days of receipt).

It looks like a fair cop, although I can’t remember driving through any fifty zones at eighty-five, and I nearly always observe the Spanish speed limits, much to the chagrin of locals following me through villages. But they’d send me the camera calibration certificate, and with me being the only one insured on the hire car it’s a ‘slam dunk’ for the authorities. It was a momentary lapse of concentration, probably talking to Mother.

I did some initial research and found out that failure to pay could result in me being arrested the next time I entered my adopted homeland. I hastily paid the fine at the reduced rate and then with further investigations found out that the four points I collected for the offence will be registered against my Spanish Identity Number (NIE). I’ve now eight left now before I get a Spanish driving ban.