Dad and I, often with younger brother in tow, had our usual route. This involved; taking the dog for a walk; going to Hague’s Pop (run by the father of a now famous William Hague) for our weekly crate of fizzy drinks; and then on to my Dads’ work at a tarmacadam haulage company, where he was transport manager. 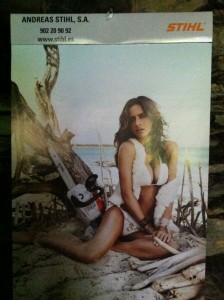 Until today I though that these calendars were a thing of the 70’s, cast into the abyss of political correctness, never again to adorn the walls of male dominated workplaces.

But I was wrong, they are alive and well in Galicia and one has been nailed to a beam in my garage by  ‘always making himself at home’ Carlos.

I do admit that last years calendar, which Carlos also hung in the garage, was very dull. It was black and white and simply said, every other Sunday, ‘Feria’ (market).

This years has been supplied by a local sales agent and has twelve large full colour pages each with a painting (perhaps even in Spain no-one with any self-respect would agree to pose for photos) of a woman in some state of undress and posing alongside a Stihl power tool – Miss January pictured here with an impressive chain saw.

Avoiding temptation, I decided not to spoil the surprise by flicking through the rest of the year, but I’d go so far as to guess that Miss August will be pictured in a lush meadow with a strimmer.

When you live in an apartment where the source of gas is a calor gas bottle (bombona) you live in constant fear of it running out. It’s best if this happens while you are cooking as you simply switch it over to a new one, re-light the hobs, and off you go. The nightmare scenario is if it fails while you are in the shower, suddenly depriving you of hot water in an already freezing house.

Tonight I drew the short straw, just after getting nicely soaped up, ‘showermageddon’! I had no option but to wash off the soap in cold water, teeth chattering, and four hours later I am still shivering.