The curious case of the missing shoe

Amanda has arrived in Galicia for the first time since May 2012, and she brought the English snow with her. After negotiating a fraught drive from Huddersfield to London and a night in a PremierInn, her plane departed Stansted at 10:45, just as the snow started in Taramundi. It quickly covered the peaks of the local hills, but mercifully fell as slush on the roads. 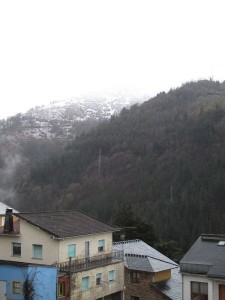 I’d been at the house in the morning and after a week of it just being me and my mate Monchu (which I now understand is the diminutive replacement name for Ramon, in the same way that all christened as Francisco are called Paco) we’d been descended on mob-handed. Facundo knew Amanda was arriving today and I think that he was looking to impress.

I was more than happy. The internal, and remaining external, window sills were being fitted and two guys were masking the window and doors in the porch ready to spray the walls with the base coat of plaster. Although our future home still resembles a bomb-site, everything is coming together.

But it wouldn’t be a day at the barn without something weird happening, and today was no different.

After collecting a ‘still stressed’ Amanda from the airport, and stopping for a nice lunch at the restaurant with the boat in the car park, we arrived at the house at around five in the evening. Amanda spent half an hour ‘drinking in’ all the developments over the last three months, before declaring that she ‘loved it’ and that I appeared to have not made a single decision which she disagreed with.

Then I was challenged by Monchu. Had I seen his shoe?

The workers get changed from their ‘getting to work’ gear into their ‘work’ gear in the big house. Like myself, this includes a change from driving shoes into heavy duty boots. When Monchu went to change back into his civvies to go to lunch, he found that one of his hush-puppies was missing.

He’d searched high and low and after his enqiury and I went and searched too. But it was no-where to be seen. Our big house had eaten a shoe, we’ll have to remember it does that. It’s a shame it doesn’t do the same thing with old washing machines, we’ve still got three of those!

2 Responses to The curious case of the missing shoe