We both like the warm weather, but we don’t like it excessively and oppressively hot. Neither of us particularly like frost and snow, particularly the harsh winters that have blighted northern England in the last few years. So a part of Spain where Summer temperature norms are bearable ‘late 20s’ and the Winter seldom drops below medium single figures was perfect. You still get the change of seasons, missing from the southern extents of the Iberian peninsula, but the differences between them are far less marked than more northerly latitudes.

That said it’s been a shocking spring in Galicia. It rained almost every day from January to June and it is only in the last couple of weeks that temperatures have started to pick up and the ground has had time to dry out from its winter saturation. It all bodes well for our impending ‘decorating’ (although Amanda seems to be planning days on the beach) trip in a few weeks. 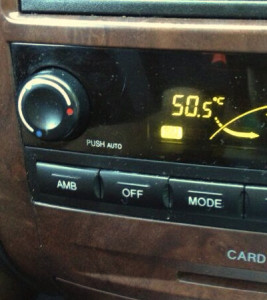 It was therefore with some alarm that I saw a photograph on facebook yesterday from an ex-University friend of Amandas, Ramon, who lives in A Coruña up on the north-west tip of Galicia. I’ve unashamedly stolen his photograph which shows the A Coruña temperature yesterday had just crept above 50 degrees. 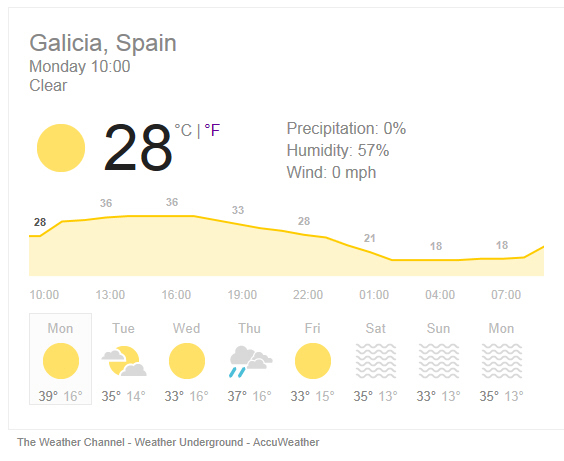 I’m glad we’ve booked a hire car with air conditioning, and digging the footings for our new patio may just have to wait until October.