Finding What Two Acres Of Grass Is Really Worth

The barter economy is alive and well and living in Galicia…and it is possible for you to get involved in it totally by accident.

After we’d bought the house we were initially exposed to this the oldest of trading types when we agreed to allow Carlos to keep his donkey on our land, grow potatoes, and for a few month each summer, keep his pig in our big house. Until of course it was time to cut its throat and turn it into sausages.

In exchange he used to strim the grass and weeds around the buildings and make of point of telling us that he had done so whenever we visited. Having used a corded Black & Decker twenty quid special back in our postage stamp garden in the UK, I was never terribly impressed at his claims and always thought he was looking for some kind of financial recompense, which he never got.

Now I’ve been forced into my own strimming, with four hours of sweaty face-guarded toil required to reach the lowest standard of ‘that’ll do, I need a beer’, I’ve come to realise that what he was doing was quite a service and perhaps is was a bit tight for me not to have shoved him the odd fifty euros as a little thank you.

And it was grass which unwittingly got us in to our current barter situation.

Earlier in the spring, just as our two acres were turning into a jungle and I was beginning to rue asking Carlos to remove his donkey, a neighbour from the next village stopped and asked whether I would be prepared to allow him to bring his machinery down and cut our grass and take it away for him to feed his animals.

My initial Yorkshiremans concern was that he was going to charge me, but after I got Amanda to clarify the situation with him, it turned out that it wouldn’t cost us a penny. What a result, we get our grass cut and taken away and I don’t have to lift a finger, or burn a litre of two-stroke in the process.

Alberto and his wife have now made about ten journeys with a ride-on mower, and an ancient tractor with trailer, and taken away heap after heap of freshly mown and dried grass and we couldn’t be happier as the land looks much tidier and is no longer a fire risk.

But then the ‘trade’ side kicked in, most unexpectedly, and most unnecessarily.

So far we’ve had two boxes of potatoes, a box of onions and three dozen eggs, all deposited on our doorstep as a thank you for our hay. Hay which we didn’t want anyway. 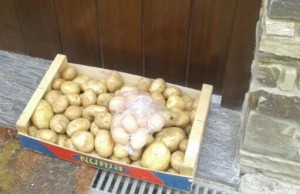 Now I’ve lost track of UK prices for potatoes, onions and eggs, but I’m guessing that overall that would be a good twenty to thirty quids worth.

Now this is where I don’t want to sound ungrateful, but in the bartering scheme of things I think that potatoes, onions and eggs must be fairly low down as they are pretty ubiquitous. Today’s twelve eggs join the two dozen already in the fridge that we’ve been given by other various neighbours (and it would be very rude to refuse). The box of potatoes is now sat in an outhouse ready to be consumed as we wade though a daily diet of Spanish Omelette and egg  and chips, but also bear in mind we’ve got a field full of our own bloody potatoes and onions, all ready for harvest.

Why can’t barter involve a neighbours excess of diamonds….or gold?