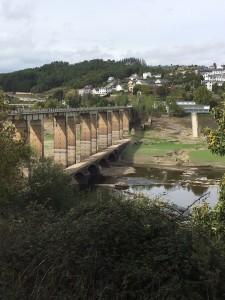 Then I had a moment of enlightenment, hydraulic cement. A local supplier had a bag, and opened on a bank holiday to sell me it, and it’s miraculous. You mix it in small quantities, and have to use it as soon as it is mixed. Once in place it ‘goes off’ in three minutes, or under water in five…chisel hard. So with the help of a neighbour I made the repairs and everything that could be done to safeguard the supply had been done.