An accidental encounter with intrigue

On our first trip to Galicia we discovered something most unexpected while driving the coast road from Ortigueira to Ferrol to meet an estate agent. It seems fitting to mention it now, just as remembrance poppies go on sale around the country ahead of the 11th November. 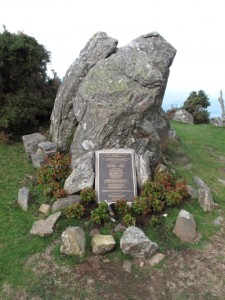 Exposed to the harshest Atlantic elements, at the side of a beautiful but deserted Galician coastal road, and off the beaten track near San Andrés de Teixido, we stumbled across a monument to prolific British actor Leslie Howard (Leslie Howard Steiner). The monument had been erected by ‘The Royal Green Berets’ to commemorate not only Howard, but also their fallen colleagues and other civilians who died alongside him during the second world war.

If this all sounds a bit boring, please persevere and read on, for it is a story is full of intrigue.

Leslie Howard was a fantastically successful actor and producer whose career began in 1920 and throughout the 1920’s, 30’s and early 40’s saw him star in such classics as ‘Gone with the Wind’, ‘Pygmalian’, ‘Romeo and Juliet (1936)’ and  ‘The Petrified Forest’. During his illustrious career he shared the silver screen with the likes of Bette Davies, Vivien Leigh, and Humphrey Bogart to name but a few.

When war broke out, Howard did the patriotic thing and returned from Hollywood to star and producesome British made wartime (now classed as propaganda) films. But this wasn’t all he did. During many ‘entertainer goodwill’ tours he came onto the Germans radar for his ‘information gathering’ with implications that he was using his position to spy for the Allies, although nothing was ever confimed.

The circumstances of his death are shrouded in intrigue.

What is not in any doubt is that the unarmed scheduled passenger plane (a Douglas DC-3 flying under the flag of KLM Royal Dutch Airlines/BOAC, Flight 777) was shot down by the Luftwaffe over the Bay of Biscay (nearest landfall where the monument is sited). Howard was on-board with sixteen others, including two children (aged 11 years, and 18 months). What is the subject of many theories, counter theories and even conspiracy theories is the reason for Howards’ time in Spain (the flight was from Lisbon to Whitchurch – near Stoke-on-Trent) and the circumstances around the interception, shooting down and his untimely death just two months after his fiftieth birthday.

Howard was supposedly on a lecture tour about cinema and film making but it is now widely thought that he had been sent to Madrid to negotiate with Franco and to urge him to stay neutral in the war rather than joining the Nazis. It had been an important mission, crucial to the war effort and sponsored by Churchill himself.

The theories surrounding the planes’ interception by the German Air Force are numerous but include speculation that;

While there is much debate about all aspects of the late life and death of Howard one thing is for sure, he was an English hero, and alongside those who perished with him, he has the most spectacular and fitting memorial atop a windswept Galician cliff top.

There is much more information on wikipedia if you are interested, this article also references several books on Howard and his last days and hours. The monument is a two hour drive from Ribadeo along some of the most spectacular roads in Galicia.

This entry was posted in Background, Places to Visit, Video and tagged Galicia, Ortigueira. Bookmark the permalink.