Time for an eviction

Those of you who are following this blog will be aware of our sadness at learning of the demise of Carlos’ aged and motheaten donkey, and the subsequent frenzied hunt over our two acres to see whether he’d taken the liberty of burying it on our land.

Our understanding was that new laws in Spain meant that it was no longer legal to breed donkeys as working animals, and that they were becoming something of a protected species. It seems that either we were wrong, or Carlos has decided that the law really doesn’t apply to Galicia/Lugo/A Pontenova/himself, as last time we visit in July we were greeted by Carlos’ new donkey, lets call him ‘Eeyore’ for want of his real name, if he has one. 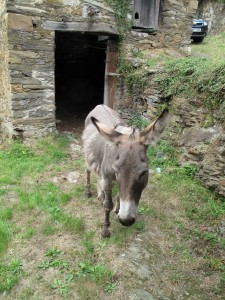 He seems a much better natured beast than the now dearly departed, primarily because he doesn’t stamp his hoofs and snort whenever he sees me. He’ll happily take a fuss and a good scratch behind the ear and I dare say would have eaten the odd sugarlump or two if we’d have had any.

Carlos arrived soon after we had introduced ourselves to Eeyore. He saw our hire car and nearly skidded off his motorcycle in his hurry to get to us which could have been catastrophic as he was dressed in jeans and a t-shirt and was wearing no helmet. He was obviously perturbed by our surprise visit and tried explain about the new arrival, telling us proudly that his new steed was five years old and that he was good at keeping the grass to manageable levels on our land.

But we’ve some bad news for Eeyore, and Carlos for that matter, for we’ve appointed a builder and got ourselves a start date for the structural works to the barn.

This means that from tuesday the 25th October Eeyore will be barnless as our chosen contractor moves in to start stripping and replacing the roof, underpinning the south facing wall, digging out the floor, opening up some new windows, installing a first floor and putting in the beams that will eventually form the balcony.

We’d taken three quotes. One was astronomical from someone who obviously didn’t want the work, but the other two were very close and reasonable. After checking out some of the previous work of the builder who submitted the lowest price, we decided that he was the one for us and we are now in the process of signing and returning contracts and moving the money for materials over to our Spanish bank account.

There are lots of other things that we now need to put in place, and I’ll be blogging about those over the coming weeks including, ‘how do we break the bad news to Carlos?’.