The shock of my life

Today, I paid the price for getting myself out of bed at a reasonable time and tackling another of the jobs on my long list for the house.  The price that I paid was one of scaring myself half to death.

All of the downstairs rooms in the big house were originally used to keep animals, mainly so that the heat they gave off would keep the occupants above warm through the long cold winters nights. The room nearest to the farmland was designated as the milking parlour, come slaughterhouse. We don’t intend to keep cows, or indeed to get involved in too much slaughter, so the removal of the steel structure and breeze blocked stalls seemed a straightforward target for the morning. 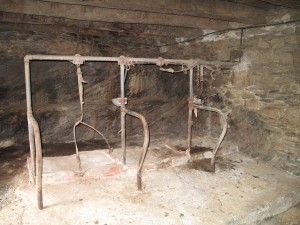 On closer inspection I discovered that we actually own a motorbike, hiding behind the stalls. It would go nicely with the two engines and other paraphernalia that were already on my scrap pile (still awaiting gypsies). This bike was complete, a yellow Suzuki trials bike, looking somewhat the worse for wear and unlikely to be taking part in any competitive cross-country scrambles at any time soon. 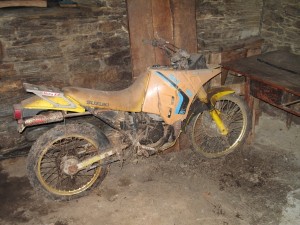 My sparkling new JCB sledgehammer made short work of the stalls, although the steel frame put up more resistance, which eventually turned into defeat and left me hatching a plan to invest in an angle-grinder. Then it was time for the clean-up and this was where I got the fright.

Sweeping up the debris I came across something which wasn’t rubble. It was a very long dead, entire, mummified and dessicated cat. Rats I expected, mice I was certain I’d find, but nothing had prepared me for a dead cat. Now I’ve got two cats at home and I love them dearly, they are my surrogate children, and I’d sell everything I own to make them well if they were ill. If I see a squashed cat on the road I struggle to keep hold the tears, and immediately call home to check that mine are still snuggled up on our bed in complete mollycoddled safety.

For a moment I was like jelly, biting my lip to hold back a girly scream, and realising that outside was a rowdy collection of Russian, Moroccan, and Galician builders who would definitely laugh at me if I showed even a glint of emotion. I bit the bullet, put the cat in my wheelbarrow, covered it with a sack and barrowed it round to the spoil heap for an impromptu burial. I told no-one.

I didn’t take a photograph. Partially out of respect for the long deceased moggie, but mostly my not wanting a keepsake of my encounter. I remember my comprehensive school art teacher, me then being a young teenager, having a dessicated cat on his art room wall. If that image has lasted for thirty years, then this is one that I’ll be taking to my grave. I don’t need a photograph.

I can’t end today’s blog with a funeral so instead I’ll end it with something full of life. While eating my lunch I spotted a beautiful robin, who was in turn watching me eat my empañada. The camera was close to hand and I managed to take this before it flew away. The robin isn’t the most exotic of birds, but everyone loves them, and I can take some solace in that I know where there is one cat who won’t be killing the local wildlife again! 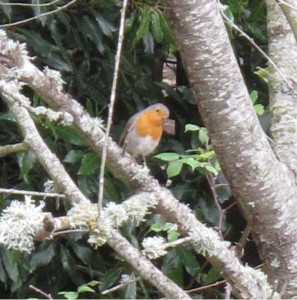 Tonights task? To forget the cat and find out where I can buy an angle grinder!