I now feel that normality has returned after the weekends hectic whistle stop tour of Galicia. Rather than hire cars, make hotel reservations, decide where to eat, and worry about what would everyone think, my concerns are now far more mundane and include;

As you can see life is very simple here (and would be even simpler without supermarkets where you can by ‘MIX’ crisps) and I absolutely love it, I just wish Amanda was here too, rather than her enjoying Galicia by proxy.

Today I’ve got one very happy builder, Angel, who today completed the roof of the cabazo. He was so pleased that he dragged me away from my digging in the horno/bodega to take a photograph of him on the summit of the grain store, ‘pleased as punch’ at his work. He’s every right to be proud, it looks superb, especially in today’s brilliant sunshine. 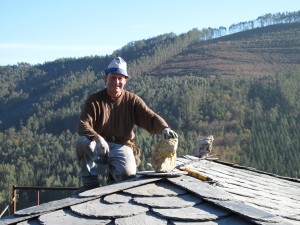 He spent the rest of the day shouting to anyone who walked past (which amounted to three people all afternoon), ‘Nice cabazo, eh?’.

Just for good measure here is another photograph of the completed cabazo roof, with its quartz end stones, restored to its former glory and ready to keep the weather at bay for the next two hundred years. This one without Angel. 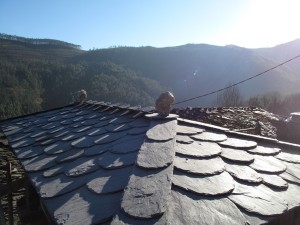 There is, however, still a little work to do inside. Yesterday I helped Alejandro (helped in the loosest sense of the word as I spent more time balanced precariously and trying to avoid falling 40 feet through the beams, rather than actually assisting with anything) move two of the remaining three beams after a rotten one was removed. 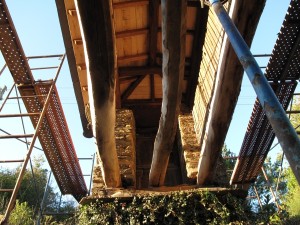 The view up from ground level (there will be floorboards later)

Today I have been mostly…in the horno/bodega. This was partially to take shade from the sun and avoid sun burn, but also because I’ve done very little in there over the last couple of days due to the rain.

In today’s excavations I found;

Tomorrow, my sole aim is to try and find the front half of the pink sheep, but I am rapidly running out of rubbish.

3 Responses to One very proud roofer