Bad things always come in threes, and I’m dreading the third happening while frantically dredging my memory and trying to find an earlier ‘bad thing’ to mean that todays’ incident was the third.

Yesterday, the final day of Mothers two day fleeting visit, I was nearly wiped out by a freak wave as we walked around the harbour walls to the beautiful little fishing village of Cudillero to get some lunch. I was photographing the said wave when I realised that it was going to be a lot bigger than all the previous ones and in taking evasive action to protect my camera I missed a step and landed on my knees and elbows with all the grace of an drunken elephant dancing the tango. To add insult to injury the wave hit me anyway and I spent the next two hours trying to dry out my best (only) pair of jeans, and my best jumper! 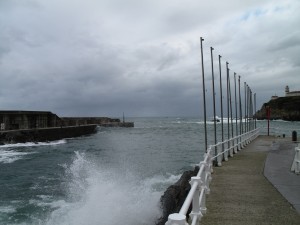 The one that I didn't get away from...

Today was to be the day that I finished removing old plaster from the internal walls of the upstairs of the barn, but I needed to fill up with LPG ahead of tomorrows festival (national holiday) and fridays ‘puente’ (bridge to the weekend when few people work). I set off early for Vegadeo and onwards to the only LPG station in 50km at Ribadeo. Just as I got on the only long straight piece of road on the entire journey the front prop shaft on the Landy decided it had turned its last turn and let go with a horrendous metal clanking.

I called my first knight, my friend from Taramundi Neil the mechanic, builder, engineer, inventor, rescuer of stranded motorists. He rushed to my aid (a twenty minute drive) but when we discovered that drive was irreparably lost to all wheels I was left with Neils flashing orange light (my hazards had given up the ghost after 45 minutes) and the necessity to call on ‘international rescue’. 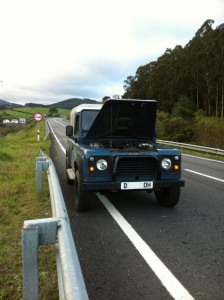 Three hours and fifteen minutes after breaking down I was on the back of a low-loader and on my way to Castropol, although I wasn’t one hundred percent convinced that I’d not been kidnapped, along with my car, by some drive-by low-loading kidnapper.

Once unloaded the offending part was stripped quickly and followed by much sucking of teeth. It wasn’t going to be a quick fix.

I called my second knight, Stephen my friend from Ribadeo, and he came to my rescue and collected me from Castropol (10km) to start the quest for a hire car. A good lunch and a couple of coffees later and I was in a courtesy car from a local garage (thanks to Stephens friendly contact) and heading home, to await the quotation for the Landy repairs. Stephen even signed the paperwork, as I suggested to the loan cars owner than now was the time for me to go rallying!

Due to the holiday it will be Friday before I get the quotation (the parts in the UK are about £100). I am expecting a shock, and in the meantime I will try and find the earlier third ‘problem’ of my problem ‘hat-trick’.

Thank goodness for my knights!