Amanda and I have had a great week in Galicia.

We signed off the first phase of the barn conversion, met the builder to discuss getting quotes for the second phase and some other works on the property, agreed with the carpenter that he could install the balcony and asked him for a quotation for the windows and doors, and met with the architect who didn’t throw a ‘hissy fit’ at our revised thoughts for the big house and agreed that we could get on with ‘repairing’ its roof (more on all these in later blogs).

We achieved a lot but for the whole week there was an elephant in the room. And that elephant weighs two and a half tons, is sun-bleached blue, has proved to be somewhat temperamental over the last few months, and has an Ifor Williams aluminium back on it.

The pre-Christmas storms and high seas that forced me to cancel my original plans and head home courtesy of EasyJet turned what should have been a pleasant four day inspection visit, punctuated by leisurely meetings with friends over good food and cheap wine, into a week long quest to repatriate the Land Rover via the Santander to Portsmouth ferry.

What made it even worse was that I had to make the two hundred mile journey on my own, with part of my support network back visiting the UK, in a car in which I have absolutely no confidence, and all on Friday the thirteenth.

After a freezing night sleeping in my coat, hat and scarf in Casa Ramon I ate a breakfast which felt more like a last supper, and with a heavy heart packed my worldly possessions into the back of the Landy. After scraping ice off the windscreen and checking she was full of all the important fluids I turned the key more in hope than expectation. But she started within a couple of seconds and we were off.

I listened to every creak and groan for the first half hour, then decided that a loud stereo was the best option as I chugged my way out of Galicia and into Asturias. Fifty miles under our (mine and the Landys) collective belt and out of nowhere the most embarrassing moment of all my time in Spain, I was pulled by the police…for going too slowly!

I’ll never live this one down.

On a single carriageway (in each direction) road, I’d moved over to the right and straddled the hard shoulder to allow an overly-aggressive and impatient HGV driver to pass me unaware that he was being followed by the rozzers, in two police cars. As soon as he’d passed me they turned on their blue lights and indicated for me to pull over. Plod No.1 came to my window while Plod No.2 made a quick disapproving inspection of the Landy.

‘Why did you pull over’, I think he asked.

I decided to go for the sympathy vote and put on my ‘being bullied at school voice’ to tell him in my best Spanish (with the only words I know) ‘It was the big car (HGV) in my downstairs (I keep forgetting the word for behind) and I drive right for big car to pass’. It was sufficient for him to understand. For good measure I added ‘my car is very slow’. He didn’t smile, unlike Galician policemen Asturian policemen don’t smile.

‘Drive more quickly’ he said, and plod No.2 watched the traffic before waving me back onto the carriageway.I think I got off lightly. No need for a document inspection or evidence of my flourescent jacket, spare bulb kit or spare spectacles, and they didn’t seem to hear the wrecked exhaust rasping away while brake fluid, power steering fluid and oil all slowly mingled seeped onto the road underneath me.

I then had a nervous ten kilometres to drive being followed by two police cars and being very conscious not to drive too slowly while keeping within the speed limits. Mercifully they pulled off at the next cafe and I continued my laborious, and uneventful way to Santander. 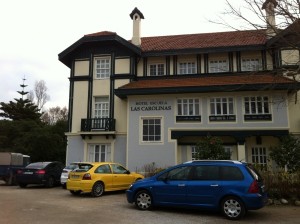 The promised (by Neil) land, Landy on the far left

Just over five and a half hours after I left the two hundred miles was complete and I arrived at the promised land, promised by my mechanic friend Neil, who’d stopped to wave me off this morning and assured me that she’d ‘make it with no problems’.

All I have left to do is make the two miles to the dockside in the morning. To ensure this I’ve booked a hotel on the edge of town with a downhill run all the way to the port. It’s a ‘Hotel School’ which is used to teach people how to be chefs and hoteliers, and pretty nice it is too at just 55 Euros for the night.

Much better than sleeping in the Landy.