We benefitted from a nice car upgrade, a brand new (1,000 km) Renault Megane Scenic Diesel with all the toys (which essentially means that I could connect to my iPhone via bluetooth and annoy Amanda with my music all week). I wore a broad grin as I approached the nice shiny car, but it wouldn’t last long.

On arrival in Pontenova for our first meeting we had some time to kill so went for a wander near the old kilns and up towards the football ground. Here we encountered our second bit of nature, the first lizard that we’ve seen in Galicia, and it was a belter. 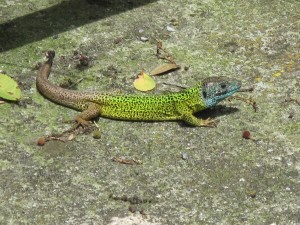 It was about 30cm long and stunning with a blue head, green body and brown tail, I photoshop you not. We’d later see a very similar one up at the house and now wonder how they have evaded our eyes for the last two years.

Up at the house we had wildlife encounters three and four, although not strictly ‘wildlife’.

We visited neighbour Miro who has a pig in his barn whose chances of survival past the end of the year I suspect are slim. He’s a friendly thing, the pig not Miro, and likes to have his head scratched with scrubbing brush. He eats corn and the best vegetable scraps from Miros garden and seems fairly happy with the world.

And we’ve not finished yet.

Those of you who have been reading my blog will know about Enrique, the donkey I accidentally electrocuted. He’s still on our farm, although evicted from the barn, and now lives in a makeshift shelter under a cabazo. 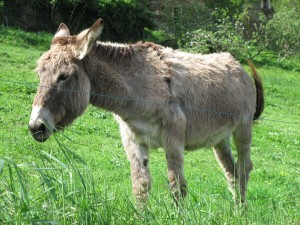 Amanda called him and he came trotting but then left her feeling guilty that she’d no treat for him.

I, on the other hand, stayed well clear. I’m sure he remembers me and the now infamous ‘electric apple’ episode.