A great sense of achievement

I’ve got a stiff back, dry hands, bruised thumbs and aching arms, but I really feel as though I have achieved something.

After twenty years of sitting at a desk, tapping on a keyboard, and making phone calls I decided it was time to get myself a decent and honest trade. I needed to learn a skill, one which would be of use to me in my future life in Galicia, one which I could use to barter with others and remove the need for some cash transactions, and one which would be rewarding. I needed to use my hands and be creative.

As we start to prepare our Yorkshire house for sale (at some point in the future yet undetermined) I called on a tradesman mate to quote me to re-render a twelve metre long wall which runs next to the house, and holds back the several hundred tons of soil which separate us from the next door neighbours.

Within an hour of starting work he called me to tell me it wasn’t that straightforward. The existing wall was actually eighty year old poured concrete and the soil behind it had rotted it, turning it to dust. The whole thing would have to come down and be re-built. He quoted me a ‘mates rate’ of £1,400 plus materials. ‘Blimey, that’s the price of a nice wood burner’ I thought to myself. ‘I’ll think about it’, I told him.

In the depths of my mind a plan started to form. What if I was to learn bricklaying? It’s a decent honest trade, I can use it in Galicia, and I can rebuild the wall myself, saving the price of a nice wood burner.

After a quick look around the internet I settled on The DIY School in Stockport and booked a four day course for the princely sum of £299.00 (including VAT and summer discount).

A colleague told me it would be, ‘‎Two days tea drinking, a day fag rolling, half a day hod carrying, and half a day paper reading. Doddle.’.

But it wasn’t, it was hard but rewarding work.

Yesterday was my last day and I have to say it was brilliant. I never knew that there was so much to bricklaying, so many ‘bonding’ patterns, so much complex planning to ensure everything is tied in properly, getting the correct mortar consistency, and how to constantly measure to ensure straightness in all dimensions.

Over the four days we learnt about tools, techniques, skills and checking. Lots and lots of checking. I built three small walls (see below) and now feel fully equipped to tackle my little project at home. 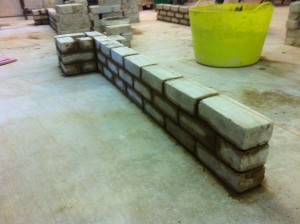 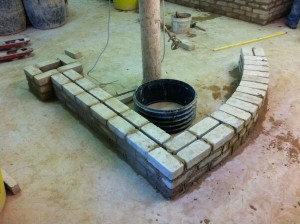 The Pinnacle – so far

I have now got a number of friends and relatives offering me their gardens, falling down walls, and porches to practice on. But more importantly I am starting to think about the many options that I have for landscaping, steps, barbecues and raised beds at the property in Galicia.

Pass me that mug of tea, woodbine, and copy of ‘The Sun’!

This entry was posted in Barn Renovation and tagged Renovation. Bookmark the permalink.