With all this global warming there must be some parts of the earth which are burning, because none of the extra heat has found its way to Galicia.

Last night I sought solace and warmth in one of Taramundi’s bars and watched with the dismayed locals as Celtic beat the mighty Barcelona, eating Consuelas tortilla tapas which discussing bathroom taps with Amanda on Windows Live Messenger. It’s a strange life I am leading at the moment, almost surreal at times.

After a slight hiccup yesterday, work finally started on the barn today and I arrived to find a cement mixer, some sand and cement, timber and one of Facundos new employees hard at work with a pick and shovel demolishing a wall and clearing the bedrock in readiness for the foundations for the porch. My new friend Obi is a local, from Mondoñedo, and used to be a lumberjack…but he’s okay!

In willing conversation, anything to avoid work from either of us, I found out that he supports Real Madrid and Manchester United and is a big fan of U2, Iron Maiden and Metallica. He also cannot understand why anyone from England would want to come and live in Galicia, which I guess is the same as our not understanding why Spaniards move to the UK. Although given today’s sub-zero temperature he may be right. 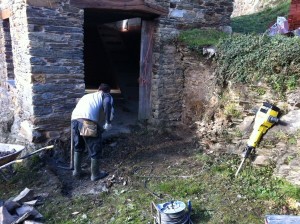 Around ten, Facundo arrived with a jack-hammer, and a proper ‘mans’ jack-hammer it is too. This one looks from the photo as though it is as big as Obi, and it nearly is. He manages thirty second bursts with it before having to put it down, the street lights dim when it is on, and my back aches just looking at it. But it is like a hot knife through butter.

The day’s major excitement was Facundo based. As he went to leave he reversed his van, with trailer attached, and the trailer jack-knifed crushing the rear passenger quarter panel, with quite some force. I heard it happen, saw the impact and damage, but managed to avert my eyes as Facundo emerged from the vehicle to survey the damage. I won’t mention it (except for here), and I am pretty sure that he won’t.

I retired to the big house and had my own minor drama. One of the floor-boards that was sound enough to walk on last winter, isn’t any longer. Although there was a sickening crunch, fortunately I hadn’t put enough weight on it to plummet the three metres into the cattle pen below, but it was a stark reminder to watch my step in what is becoming an increasingly dangerous big house.

You can only stand and watch someone with a jack-hammer for so long so now I’m back on the Internet quest for a bathroom tap . I can make on the spot decisions about the exact location and dimension of the porch, materials for flooring and walls, and where the septic tank is to be installed, but as for choosing a tap, I’m clueless.

I’m obviously not a details person.

This entry was posted in Barn Renovation and tagged 13, Barn, Galicia, Pontenova, Renovation. Bookmark the permalink.