So much has happened today I can’t fit it all into one blog, so this mornings excursion to the carpenters in La Roda will have to wait until tomorrow.

I’d decided to treat myself to fifteen extra minutes in bed before my planned trip to the coast to check on the progress of the windows, but the still ‘badly infected’ Facundo had other ideas. He rang me at some ungodly hour under the pretense of checking a measurement for an internal wall, but what really he wanted to tell me, was that today was the day that the big excavator was going to be on-site.

When I got to the barn there was no sign, and the guys working on the now ‘confirmed measurement’ internal wall were aware of the diggers likely arrival but had no idea when. I graciously accepted a coffee of my new friend Joaquín (the plasterer) who brews it from water taken from the water-butt on a small gas fire. It has the consistency of treacle and it blows your socks off!

I wasn’t going to miss the action and ensured that I was back at the barn for 14:15 to see what action would unfold. I have to say that I was incredibly impressed with the amount of work that one man and his machine can accomplish in just four hours. For that is all that it took for him to dig a fifty metre trench, fell three trees, bury the septic tank and then cover over his tracks. 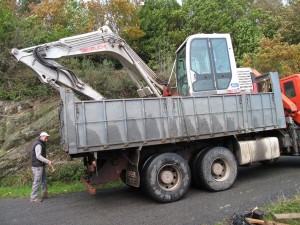 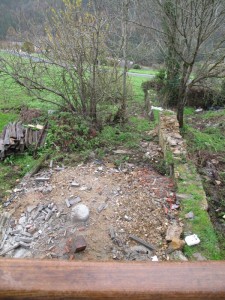 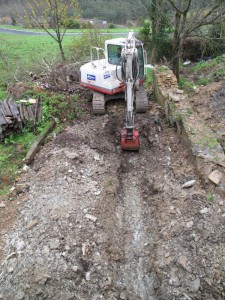 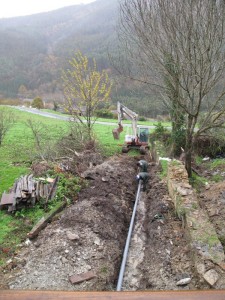 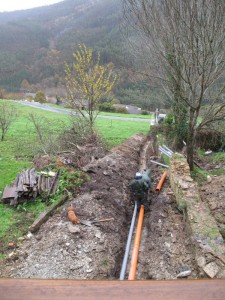 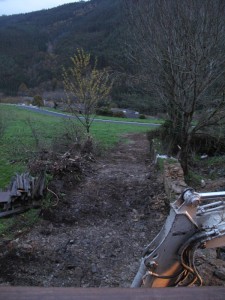 Miro, our next-door-but-one neighbour had informed me a couple of weeks ago that his water supply came across our land, which was the first we knew about it. As soon as he heard the machine, he came up to the house to make sure that we didn’t cut through it, and cut him off.

Angel, then the new worker ‘whose name I don’t know and am too afraid to ask’, and then Facundo all got their ears bent by a quite agitated Miro. To me he just rolled his eyes, and I smiled back, I was on his side. Fortunately, pipework and connectors were magically summoned from the local town and the repair effected, and Miro calmed down a little.

We now have all the necessary pipework in place for the bathroom, kitchen and guttering drains. I feel that today, of all the days so far this building season, we’ve made real progress.

An added bonus is that the removal of the three trees has improved the view no end, and they will give me chance to get my wood pile off to a good start, once I’ve had my basic chainsaw operator training from Neil.