Noah had the right idea

It hasn’t stopped raining for forty-eight hours. Not one minute of respite, just relentless stair-rods, causing landslides, impromptu waterfalls, and heavily swelled streams and rivers. The way to describe such rain is with the phrase ‘of biblical proportions’.

I am not sure that I’ve ever seen anything like it, at least not for this duration. ‘Clive’, the chainsaw, has most definitely not been willing to come out to play so instead we’ve been trying to do some of the indoor finishing work in what is almost a water-tight barn. 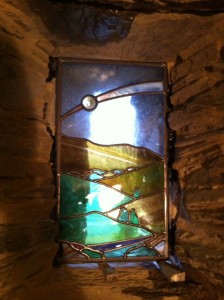 Yesterday saw the final pane of glass fitted in the form of the stained glass window which we had commissioned from  Dave Griffin in Derbyshire. At the moment it isn’t cemented into place and just held in place with glue, but it will be permanently fixed on Monday.

I knew that there would be no-one on site today but I decided to go up and check for leaks and I am glad that I did. As you can see from the photograph there is a small leak above the window which is actually coming along the top of the stone immediately above the pane, and then pooling and dropping down inside the house. I’m glad I spotted it as it is probably a ‘once in five years’ occurence. That is one photograph which will cause some head scratching for Facundo on Monday morning.

I bottled out of looking inside the main house, I knew that it would be pouring in with showers in all the rooms, and running down the walls in more places that I could count. It would only have been depressing. 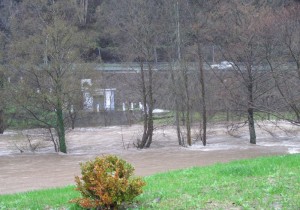 The road from the house to Pontenova was covered in debris; rocks, branches, and mud. One scary aquaplane almost saw me in the trees and reminded me that, speed and water in a car that weighs the same as a tin of beans, aren’t a good combination.

Passing over the new bridge in Pontenova allowed sight of the Rio Eo, now in full flood and a good three metres higher than it’s norm.

I dodged the landslips across the Pontenova to Taramundi road and spotted Neil who was on his way to check out his house (still under construction) just outside Taramundi. I suggested ditching my car and joining him.

The private road to his house was under water and we created quite a bow-wave as his little Citroen just struggled to make it through. I am not sure that the Fiesta would have made it, at least not without me losing my damage deposit.

An hour later, soft furnishings moved to safety, sand-bags in place, and culverts unblocked we retired to the cafe in Taramundi.

Lest to say, I don’t think that Neil will ever be short of water.

This entry was posted in Local Life and tagged Barn, Pontenova, Rain, Taramundi. Bookmark the permalink.

2 Responses to Noah had the right idea