There were two main reasons why we booked a week in Galicia in late April/early May; to be there while the kitchen was fitted; and, to be there while the internal doors were hung. These were the two remaining major structural items that would, between them, see the completion of the barn with the exception of decoration and furnishing.

To say that we were quite excited is an understatement.

But after almost three years of everything going right, we finally ran full speed into the ‘mañana’ buffer, derailing our best intentions and sending us home filled with disappointment.

This was the scene which greeted us arrival at the barn at the start of last week. Lots of lovely brown boxes packed with kitchen parts, all freshly delivered by IKEA and awaiting the fitter who was booked for Thursday and Friday. 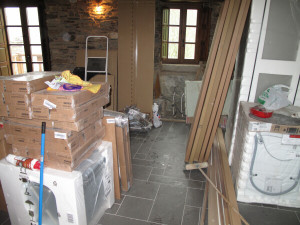 We contacted the carpenter and he arranged to come to the house on Thursday afternoon to fit the internal doors and all was good with the world. Our long distance planning had seemed to have worked and everything was scheduled. Then the wheels came off, not one by one, but all four at the same time.

After doing various jobs around the barn on Tuesday and Wednesday we got a text, through a friend (it’s a long story) to say that the fitter would be with us at 10:30am on Thursday. We got to the house early, full of anticipation to see the brown cardboard boxes turn into a kitchen before our very eyes, and we waited, and waited. At 11:30 the fitter arrived, exchanged pleasantries, asked to see the plans and then told us that he wouldn’t be able to fit the kitchen as one of the walls wasn’t square and would need to be plastered (see below). 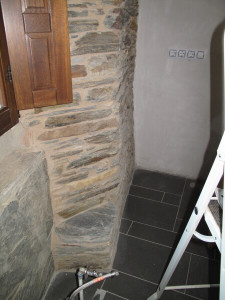 As we’d earlier paid IKEA to send a surveyor to check the measurements and tell us of any preparation that we needed to do (a couple of sockets needed moving), we were stunned by his refusal. I suspect that he realised he hadn’t allocated enough time to finish, and that as an IKEA fitter he didn’t have the skills to do anything other than screw together unit carcases and bolt on the doors.

We called our builder who dropped everything and was with us in under ten minutes. He then spend half an hour frustratedly discussing with the adamant fitter, suggesting options to enable the fitting to start, but all to no avail. There was no backing down, he had the might of IKEA behind him, we would have to get the wall plastered.

The fitter then decided to check the delivered items against the manifest. Two hours in and he mentioned that the freezer we’d bought, independently of IKEA, was big enough for person. I took the opportunity to crack my first ever joke in Spanish; suggesting that a couple of hours earlier it was nearly him ‘dos horas antes, es para ti’.

He gave a nervous laugh!

Three hours after his arrival and all items correct and accounted for, he apologised and left, suggesting when we re-booked that we allowed four days for fitting (although IKEA are paid for piece work rather than time). We contacted IKEA who also apologised and offered to re-arrange at our convenience, I got on the iPhone EasyJet app and booked a return in early June.

To add to our woes, within ten minutes of the fitter leaving, the carpenter called to say that he’d just been to collect the doors and that he wasn’t happy with the finish. It would therefore be next week before he could come to fit them.

So that was it, the fatal second goal close to the end of the game, we’d lost, and Spain’s mañana attitude had won. So here is a photo of how the kitchen looked when we packed our bags to leave on Saturday afternoon. 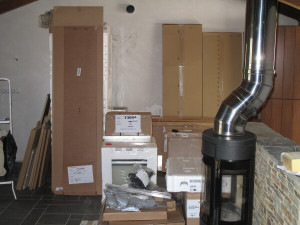