A strange love of tractors

I have an almost inexplicable fondness of tractors, and Galicia is full of tractors, it’s easy to have your head turned when driving.

In the book ‘Everything but the Squeal’ by John Barlow, he mentions that;

‘Like Mexicans can’t make good wine, and the French can’t be modest, the Galicians can’t drive. Imagine a place populated  entirely by giddy, egocentric children, each one of whom has been given a supercharged tractor for Christmas, without training or guidance. ‘

Galicia is actually full of people who have tractors, although I will admit that very few of them could claim their trusty steeds to be supercharged.

I say ‘almost inexplicable’ because from the depths of my sub-conscious I can pull some vague recollections of very happy memories relating to tractors.

When I was a kid, probably up to the age of about ten or twelve, we regularly paid family visits to Pete and Jane, the much ‘cooler’ parents of John and Mandy (the same ages as myself and my brother) who lived on the outskirts of Nottingham. Jane’s family were farmers, and at least once a year we’d be taken along to their rambling working farm and run riot for an afternoon with the part-feral farm-based cousins of John and Mandy, while our parents sat around and drank tea and ate cake.

There were all sorts of interesting things to do, most of which would now certainly be outlawed under some health a safety regulations. We would swim in the mill pond and pick water-cress, build castles from hay bales, drive unlicensed and untaxed cars through the woods (without a seat-belt), chase chickens and tickle pigs, and generally get filthy and sweaty. It was as much fun as it was possible to have as a ten year old, and would often lead to journeys home wearing just our underpants as our wet and muddy clothes were consigned to the boot.

So where do tractors come into this you might ask?

Dad was a truck driver, and fancied his abilities to drive anything. When visiting the farm he’d sometimes borrow the keys to their tractor and go and do a bit of ploughing, a true ‘busman’s holiday’. Janes parents were happy as they got some free labour, Dad was happy as he was driving something unusual, and I was happy because I’d sit beside him as he wore a broad smile, while making almost geometric lines across the farms rolling acres.

The memories it brings back are perfectly summarised in the song lyrics of ‘JCB’ by Nizlopi (after all a  JCB is almost a tractor);

Well, I’m rumblin’ in this JCB
I’m five years old and my dad’s giant sitting beside me
And the engine rattles my bum like berserk
While we’re singing
‘Don’t forget your shovel if you want to go to work!’

And we’re holding up the bypass, oh oh
Me and my Dad having a top laugh
Oh woah’

So when Neil and Rosa took me to the Feria in Vegadeo on my last visit I was a little distracted by the show of tractors in the agricultural area. Neil thought I was a bit mad, despite him owning a whole plethora of plant, all of which are integral to what he is doing in building his own house. 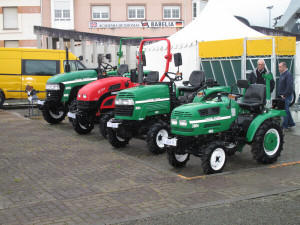 I will need a tractor. Okay, I only really need a ride on mower, but I doubt that I’d be able to stretch to one of these beauties.

Neil was more taken with the idea of one of the tea infusions on offer in the exhibition hall, although I am not sure it would have particularly good idea when operating heavy machinery. 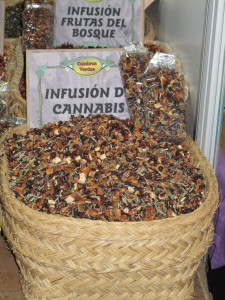 I wouldn’t know whether to brew it, smoke it, or bake it into a cake!

3 Responses to A strange love of tractors