Call of the Camino

Mention Galicia and many peoples first thought is Santiago de Compostela the ultimate destination for the caminos (Way of St James) which work their way through the autonomous region. Travel to Galicia in the summer and it will be impossible to miss dishevelled, bearded, sandal shod, rucksack carrying, scallop shell wearing (resembling the setting sun) pilgrims testing themselves to the limit to reach the final resting place of St. James, the only Saint to be buried west of Rome. 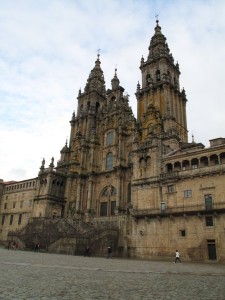 People walk the caminos, for there are many, for many different reasons. For many it is for a religious pilgrimage, the reason why people have been walking the routes for over one thousand years, but for others it is a holiday, a challenge, a family bonding experience, or just something different.

There are twelve main waymarked routes to Santiago de Compostela starting as far away as Paris, Geneva, Arles, Seville, Granada, Valencia, and Barcelona. They are all a fair old ramble with the Geneva route chiming in at a massive 1,900km. To officially qualify as having made a pilgrimage you need to walk at least 200km and complete your journey in Santiago de Compostela and have your certificate stamped at several points along the way. 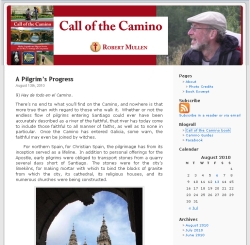 One such pilgrim in 2005 was Robert Mullen who has written a blog about his experiences to publicise his new book ‘The Call of the Camino’. He walked the Camino Francés from the foothills of the Pyrenees to Santiago de Compostela, a journey of around 500 miles, through all the delights that Northern Spain has to offer. I’d urge you to take a look as the blog is well written and very nicely illustrated with Roberts’ own photographs.

The Northern Route, originally made as an alternative to the Camino Francés to avoid the Muslim occupied areas of Spain in the middle ages,  comes within 30km of our house in Liñeiras as it passes from Ribadeo to Mondoñedo to Abadin.

So if you fancy a bit of a ramble, followed by a few days of luxury at our Casa Rural, start making your plans for 2012 or 2013. Hot showers, good food and pampering guaranteed.

This entry was posted in Places to Visit and tagged Camino, Pilgrims, Santiago. Bookmark the permalink.