The ‘Old Firm’ is Back Together for its Swansong

Since purchasing the big red van I’ve been on a quest to find the perfect co-driver for my trip to Galicia, to ensure the safe passage of all our valuable possessions (and Amanda’s shoes and handbags).  The choice of an ideal accomplice was far from simple.

I needed someone that is; dependable, mature, safe behind the wheel, fluent in French and with enough charm to talk us out of the clutches of the gendarmerie or guardia civil, should the occasion arise.

In the end, and in absolute desperation, I plumped for the only person who was allowed by their Wife/Mum/Work/Probation Officer/Doctor to join me in my quest, and at least he’s got one of my desired co-pilot qualities, he’s mature! With the other desirable qualities…we’ll just have to take our chances. 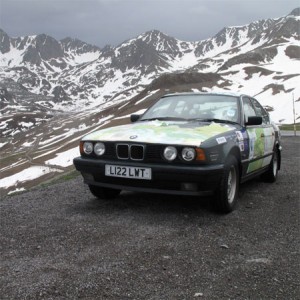 Chris and I have history. He was my colleague and co-director for close on twenty years and this won’t be the first time that we’ve driven to Spain together, although this time will be somewhat different to the first.

Back in 2009 we took part in Barcelona Bangers, a charity ‘race’ from Calais to Barcelona in a car that had to have cost less than £200.

We managed to acquire a clapped out four cylinder BMW for the princely sum of £195, spend a few hundred pounds making it roadworthy, and then covered it in paper maps and sponsors logos on the way to making over £4,500 for our chosen charity, MapAction.

The car made it to Barcelona with just the smallest of glitches and then decided to ‘turn up its toes’ in an underground car park at our hotel. Had I not been able to convince a bell-boy, in very poor Spanish, that we were prepared to give him the car in exchange for his signature in the ‘Permanent Export’ box on the V5 certificate, we’d have missed our flight home.

It was a terrific adventure as we travelled in convoy with a Jeep dressed as a bull, a Fiat Pope-Mobile covered in condom advertising which drew hatred from the populous of the deeply Catholic heartlands of western France, and sixty or so other garishly decorated old bangers.

Chris has made some sacrifices to join me, and I’d specifically like to thank his long-suffering wife and daughters for giving their blessing for him to come on my Galician odyssey.

Our 2,060 kilometre (1,290 miles) journey starts on Saturday lunchtime and we hope to be at the Barn in Galicia sometime on Sunday evening having travelled all weekend and avoided the majority of the road tolls, traffic jams, road works and the various traffic enforcement authorities.

Tomorrow is all about packing, weighing, and then unpacking enough things to make the journey at a legal weight. Fortunately my brother Ian is coming to lend his muscles for the afternoon.