France, on the Way to Spain

As an Hispanophile I have recently considered France as a ‘necessary evil’ between England and Spain, should one be forced to use the roads rather than the sea or air. I have been there on multiple holidays, including one where Amanda and I used the motorways to drive down to Perpignan, but it never really appealed over Spain. But twenty hours of sitting high up behind the wheel of Hercules, avoiding the tolls, and with no-ones company but my own, has somewhat changed my opinion.

I had decided that for the solo journey home I would avoid as many toll roads as I could, so I was condemned to lots of single carriageway roads with the occasional roundabout. The main menace were the hundreds of speed cameras which seemed to be located in even more stupid places than they are in England, and the resulting build-up in traffic, as I tried to avoid getting points to my name in yet another European country.

One of Amanda’s friends, the lovely Jenny and long-suffering husband Tony had agreed to put me up for the night in Clergoux (in the central massif) and had promised me a good meal, a glass of wine (or three), and a comfy bed.

After discovering that it is only possible to buy ‘Cheese & Ham’ sandwiches from French service stations, which isn’t great for a vegetarian,  the thought of a hot meal, and some decent conversation, was well worth the 175km (1 ½ hour) detour. After getting lost just once under my own steam, I followed Tony’s instructions to the letter, and thirteen hours after leaving the barn I was stood in Jenny’s kitchen, clutching a nice cup of tea and comparing French/Spanish diesel prices.

Revitalised after a great nights sleep, I set off around nine-thirty leaving my benevolent hosts to their day, and set the satnav to avoid all toll roads (quickly forgetting that Tony had told me that I must take a short seventy cent toll across to the A20).

The satnav obeyed without question and within ten minutes it exposed the folly of my plan.

I always ridicule the many tales of people who follow their satnav systems onto railway lines or into canals, but now I found myself at the entrance to a small hump-backed stone bridge wondering whether Hercules would fit, or worse, whether he’d become beached on the summit. After a minutes consideration I decided to persevere, as navigating the last three kilometres in reverse seemed like the greater of the two evils.

After negotiating the bridge the ‘trial by small spaces’ wasn’t over.

I was then in the smallest of villages (Gimel-les-Cascades), in the largest of vehicles, with a very tight left turn to make between two houses. I accelerated gently and waited for the crunch which would signify that a nice eighteenth century French cottage was gaining twenty-first century red stripe. But mercifully it never came.

The first chance I got I stopped and re-programmed the navigation.

The rest of the journey was without incident. Downtown Orleans was downtrodden and a bit grim with boarded up businesses and empty office blocks, but apart from that the French countryside was delightful. Small, beautiful, well-kept villages. Small, pretty, towns to by-pass, and mile after mile after mile of rolling fields and tree lined avenues. 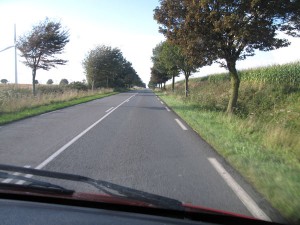 Much of Northern France had been driven in the dark on our trip out to Spain but I saw it in its full glory on the way home and there was much to like. The good, or possibly bad, news was that the awful rotten cabbage stench which had plagued us for the first four hours on our outward trip was nowhere to be smelled. This inclines me to believe it might have had more to do with my co-pilot than he was letting on.

This entry was posted in Background and tagged France, Roads. Bookmark the permalink.