Amanda’s parents, Sue and a somewhat dizzy Brian (suffering from some form of then undiagnosed vertigo), had answered the call for van loading assistance and fortunately brought along their friends Garry and Lynn. Despite getting lost on the way, a normal occurrence with Brian at the wheel even when he doesn’t have vertigo, they were with us by just after ten and helped us get all of the heavy items into Hercules.

Two cups of tea and the remnants of our biscuit barrel later and we were waving them off ahead of a nice leisurely lunch and packing the remaining few boxes. Full to the brim, literally, we headed for the weigh-bridge in Honley and that is where the proverbial wheels started to come off. 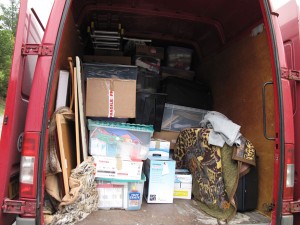 We were 270 kg overweight, and that with only a half a tank of fuel on-board. Panicking, we skulked home to try and get legal again, jettisoning things we thought that we could live without. Amanda volunteered my golf clubs and trolley, which were put back in the garage, and I managed to identify a suitcase of her ‘summer clothes’ which got the same treatment. It was like a big game of Jenga in the back of the van with each of us nominating one of the others beloved items in turn.

In the end we shed 150 kg, checked the Internet to find that under 5% over was ‘just a fine’ and decided to risk it. Now time was running out to get to Dover for our pre-booked, un-changeable, reservation. Mercifully, despite endless miles of roadworks, or should that be road-not-works, we made it to the port and checked in, only slightly worried by the ‘wheezing’ coming from under the bonnet.

The ferry left early, and arrived earlier, and seemed to be a service run almost exclusively for Eastern Europeans who, despite what Mr Farage would have you think, seemed to be leaving rather than arriving.

We made good time on the first 100km of the journey, albeit with a strong cross wind trying to blow us into the outside lane. Climbing up a hill, in the pitch dark, we lost power. Hercules the turbo diesel was now just Hercules the diesel, we’d no drive. A call to International Rescue and an aborted trip to Spain were already on the cards, and we’d not even paid our first toll.

We pulled off into a, by now unmanned and deserted, service area and I went for the typical amateur mechanics first remedy. Switch off the ignition and re-start it. It worked a treat and we were back underway. Several hours passed before it went again, ‘limp home mode’ enabled meant that hills were almost impossible to climb with an overweight van. The off/on remedy did the trick again.

Just five hours from the barn, I thought I’d cracked it. A few more resets and we’d be home free, but then it gave up the ghost totally. Resets lasted until the next time I started to put the engine under any strain and it was getting impossible to drive. Long, and high, hills lay ahead through Bilbao and Santander and into the Picos and all I had to play with was 3,000 RPM and a very heavy van with no turbo.

What followed was the longest seven and a half hours of my life as we crawled up hills at 30 mph, being overtaken by wagons, themselves with their hazards flashing to warn that they were slow vehicles, and then getting up to 80mph on the down hill sections yelling at slower cars in front to get a move on so that we could make the most of our momentum.

A five hour journey took fifty percent longer than it should have but just before 1am we made it up the hill to the barn and sanctuary. We were both exhausted but ever so slightly euphoric at having rescued what could have been a real disaster (being recovered with all our possessions back to Huddersfield).

And how much of the driving did Amanda do….you’ll have to ask her that.

This entry was posted in Background and tagged Barn, Driving, France, van. Bookmark the permalink.