Braving the Cold for Carnaval

Stephen and Kay had taken pity on me as I was on poorly cat sitting duty, with Amanda back in the UK for her brothers wedding. They’d invited me to accompany them on a trip to Ribadeo to witness Carnaval, and as I gladly accepted the offer of company I was fearing the worst.

The last ‘procession’ event that we’d attended was the arrival of the Three Kings in A Pontenova in January which was somewhat of an anti-climax as a single small flat-bed van did three laps of the town at break-neck speed while the three kings held on with white knuckles, expect the blacked-up lady ‘king’ who held on with blacked-up knuckles.

As I accepted the invite I was expecting a couple of tractors and a donkey, and perhaps a bit of tinsel, and then we could retire to the warmth of one of Ribadeo’s many cafes for a nice cup of coffee and perhaps some tapas.

It was scheduled to start at 5pm and as we arrived ‘on the dot’, Ribadeo was heaving. The streets were lined with people and in the distance we could see the start of the procession heading our way, led by a band of a dozen or so musicians.

The whole procession took an hour and forty minutes to pass us and must have contained the entire population of Ribadeo and their friends from neighbouring villages.

It was most impressive, gave us a chuckle (especially the straight-legged walking Lego men who looked like they’d had a ‘toilet accident’), and despite the cold it did manage to register quite highly on the ‘we were entertained’ scale.

I liked; the Pirates (including the guy with a stepladder lifting the bunting so that the mast didn’t snag), kids in picture frames illustrating all of Ribadeo’s festivals, the ambulance and medics operating on a patient who was smoking a cigarette, little red riding hood and the big bad wolf, and the ‘Priscilla Queen of the Desert’ camp float. 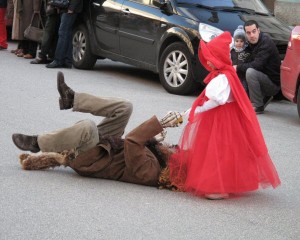 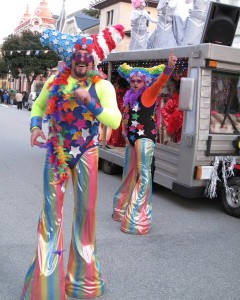 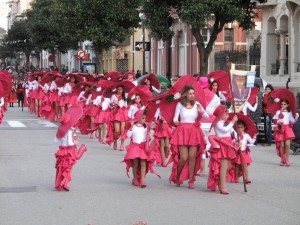 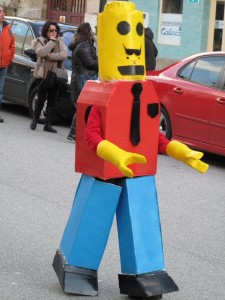 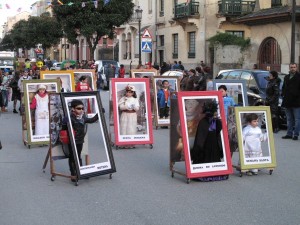 As the cold started to bite we retired to the promised cafe for a warm and a coffee or three.

Shame Amanda missed it, but there’s always next year.

This entry was posted in Local Life and tagged Fiesta, Ribadeo. Bookmark the permalink.