Surprisingly only the USA, Germany and China produce more wind power than Spain, but it is much less of a shock to find out that within Spain, Galicia is the third largest producing area in the country. As the wind whips inland off the Atlantic the first thing that it often encounters is the wind farms which the autonomous state of Galicia has cunningly located, thanks to many EC grants, to catch it. 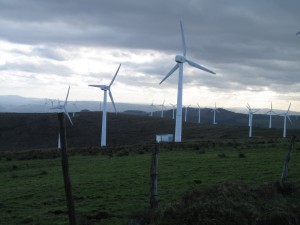 Wind turbines do solicit severe reactions from people, oriented towards one end of the spectrum or the other. Wind farms are either loved or hated. I can understand the rationale behind the dichotomously opposed views.

Personally I quite like them. There are three stood on the hills to the west of our house, a couple of kilometers away, and I expect to see more each time we visit. There have been complaints in the local newspapers, especially around the time of winter power-cuts, that they are noisy, but I’ve never heard them. 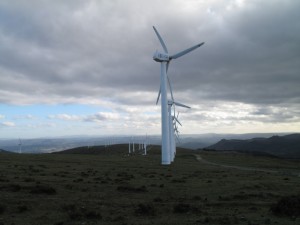 Everyone is a NIMBY (not in my back yard) and I guess that if I found out that they were planning more turbines directly opposite the our property then I’d be likely to change my view. But while ever they are far enough to be appreciated for their modern beauty, juxtaposed against the natural skyline, then I’ll be a distant supporter.

This entry was posted in Nature and tagged Galicia. Bookmark the permalink.