My four month absence from the blogosphere has probably passed mostly un-noticed but if you have been logging on regularly to look at the latest instalment from our Galician odyssey then I can only apologise. I promise to try and do better over the coming months. 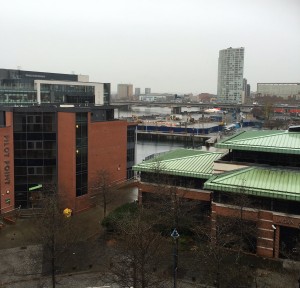 To be honest the reason for my silence is that I took the Queens shilling, almost literally. When we were visiting the UK last September I got a phone call out of the blue from a previous central government client (who I last worked for five years ago) who asked if I’d be interested in a three month contract based in Belfast. The project sounded interesting, suitably short and well remunerated so I said ‘what the hell, why not’. After jumping through a few hoops which included setting up a new UK company, insuring myself up the wazoo, and dusting off my old suits, I started work in the middle of October and the last three months have just been a blur.

Three months has turned to six and my thoughts of alternating weeks in Belfast and Galicia soon proved unrealistic. I hired an apartment on the dockside near Belfast city centre and swapped my rural idyll for the shrieking sirens, crowded streets, tempting restaurants and late night cinemas of a modern metropolis.

Amanda stayed back in Galicia, although she did visit the bright lights briefly but was very restrained with her flexible friend.

All this has meant that the house development is stalled. We finally got the licence for replacing the roof, and it only took nine months, but with the on-going work in Belfast we decided to postpone our builder until January so that I could be on-site to ‘advise’ and ‘assist’.

The extension of my contract in Belfast until the end of March has led to a second postponement and we are now hoping to start work on or around the fourth of April. This pleased the builder who I think was under some stress on other jobs due to some appalling weather over the Christmas period.

So you are now mostly up to date, although there is plenty more I can tell you over the coming days/weeks until work starts including the latest on Kit the cat who is currently residing in the animal hospital after an operation to remove her ‘lady bits’ and hopefully stop us from becoming over-run with kittens that we couldn’t bear to give away.

This entry was posted in Local Life and tagged Belfast, Roof. Bookmark the permalink.

1 Response to Taking the Queens Shilling