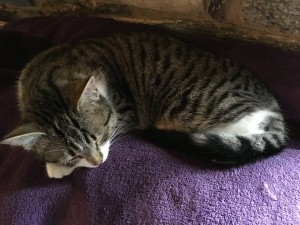 This is our ‘outdoor’ cat Kit.

She mysteriously arrived in our woodpile on the 1st September last year, just a fortnight after the death of our beloved Bonita. With no real choice, Amanda and I reluctantly agreed to feed her and keep our fingers crossed that she’d either wander home, or that her mother would come and find her.

We suspected she was only four or five weeks old, a hissing bundle of attitude, who purred when eating. It only took hours for us to succumb to her charms.

She stuck, her with us, and us with her.

The regular kitten food was enough to keep her confined to a ten metre radius from the wood pile and we were quickly too attached to make too much of an effort to try and find her real home, partly out of fear that she’d end up alongside a large stone in a hessian sack at the bottom of the local river.

After initially being convinced that ‘she’ was a ‘he’ (I have a very poor record at determining the sex of cats, so far I have been 100% wrong) a visit to the vets informed us that our little girl cat was in fine health. So now we had to plan for her to be neutered. If she did end up with a litter of kittens we both knew that we’d end up keeping the whole brood.

On her arrival we committed to one another that Kit would be an ‘outdoor cat’. We’d look after her, feed her, inoculate her, and take her to the vets if she was ill or injured. But, she was going to be an ‘outdoor ‘ cat, catch mice, sleep wherever she could find a dry and warm spot, and hold her own against the neighbours assortment of thug cats.

We did really well…for months.

Despite the cold and the wind and the rain we managed to withstand the temptation to let her in the house, all bar the odd quick visit when she snuck in to investigate.

Then came the time for her ‘operation’, the one to remove her ‘lady bits’.

We took a perfectly healthy (and seemingly very attractive to the local Tom cats who came calling on an almost hourly basis) Kit to the vets in the middle of January. We’d previously had Bonita neutered and when we went to collect Kit the following day we expected a small shaved area on her rump and a couple of stitches. What we found was a groggy and unhappy cat whose whole chest area resembled a piglet who had been given a full CSI style autopsy, and then stitched back together.

We were both shocked, almost to the verge of tears. Our healthy kitten had been butchered. We nursed her home, put on the fire, and let her sleep it off with a night inside, the first ‘barn’ night of her short life.

The vet now said we must keep her in for at least week, give her twice daily anti-biotic, keep an eye on her Frankenstein’s monster like wounds, and report back in a week. But during that week, Kits first week in captivity, the wound began to look a little ‘angry’ and as nervous and guilty parents we took her back. The vet didn’t like the look of it either and she was incarcerated in their animal hospital for four nights before we could go and collect her again. We felt bereft.

On her return, this time spending the hour journey back from the vets being nursed by Amanda, we had to clean and treat her wound twice a day, and again she couldn’t go out. 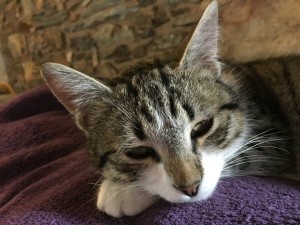 On Wednesday of this week, three weeks after the operation, we concluded that; the wound was healed; we finally removed her plastic collar; and, we allowed her to venture back outside for the first time.

She doesn’t really like the ‘outside’ any more. When she does venture out it is only for a few minutes. She comes back in to use the litter tray and then she finds somewhere nice, warm and comfy to go to sleep.

I think she’s landed on her feet!

This entry was posted in Local Life and tagged Barn, Kit, Lineiras. Bookmark the permalink.

4 Responses to Our ‘Outdoor’ Cat Kit