Amanda and I returned to Spain on Sunday afternoon after a first joint trip to England in over two years. We’d been for a special meal, dinner suit and posh frock, held in honour of one of my old mates who had the privilege of captaining my old golf club this past season.

It was a fleeting visit, flying in on Friday morning and back on Sunday afternoon with just enough time to; do a bit of shopping for essentials (such as Paxo stuffing, PG Tips tea bags, and Bisto gravy granules), have a fleeting visit with family, and stuff our faces with a fried breakfast and marvellous fish and chips (not at the same sitting).

I’d developed the snuffles and a dry throat as we drove down to Stansted Airport, and by Tuesday morning it had developed into full ‘Man Flu’. I know that many women believe that this chronic disease is a myth but I am reliably informed by a good friend (male) that the only female equivalent to this heinous illness is the pain and discomfort of childbirth.

So, by eleven o’clock on Tuesday morning I was wrapped up in a blanket, dosed up to the eyeballs with Ibuprofen, clutching a big cup of Max Strength Lemsip, and settled down for a day of TV, perhaps a feel good film or two and an early night. And then the phone rang.

It was Facundo our builder who explained that his team had the rest of the week free and that it would be the perfect time to undertake the works on our bread oven (Horno) which comprised; levelling the floor, pouring a concrete plinth, and re-lining the bread oven to allow us to start using it for its intended purpose. He’d quoted us months ago, and we’d accepted his price, but he chose this, of all days, to arrange to start the works.

My heart sank. The bread oven was full of machinery and materials amassed over the last two and a half years which needed to be moved to my new workshop, which was currently doorless and very insecure. Facundo explained that it was ‘either tomorrow, or it could be a couple of months’.

I arose, like Lazarus, from my death bed, changed into my work clothes and went to fit the door and lock.

Five hours later, and with only half of the contents of the bread oven moved into my new workshop, I collapsed into bed, exhausted.

Facundo’s boys arrived at 7:30am the following morning, helped me clear the rest of the horno, and set about their work. Four tonnes (60cm at its deepest) of rock were removed with a heavy duty jack hammer, drainage channels were dug into the floor to drain the four natural springs which emerge when the water table rises, gravel and membrane were laid down before a couple of cubic metres of concrete were poured. In the meantime the old floor from inside the bread oven itself was removed and a new set of earthstone tiles fitted by Facundo, who spend a couple of hours physically inside the oven, swearing under his breath as his head regularly came into contact with the low ceiling. 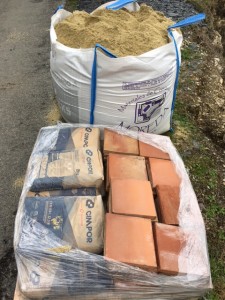 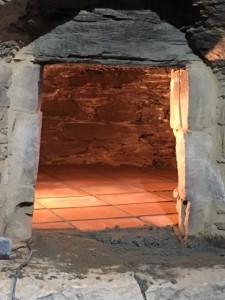 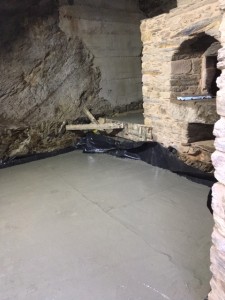 There is still plenty of work to do with a stone floor to lay, electrics to install, a steel oven door to have fabricated, and a sink and running water to connect. But at least we now have a level floor and a functioning bread oven.

Time to get some lessons in making the local ‘pan Gallego’.