Additions to the Family

We have known Dolores since before we bought the house in 2010. Our estate agent introduced us to her as an ex-high flying executive from Madrid who had packed it all in for a quiet life in a Galician backwater. She’d bought her house believing it was in Asturias, only to discover to her distress that it was the very last house in Galicia, her two near neighbours being Asturian.

Every year Dolores has a problem.

In late Spring a heavily pregnant cat appears and takes up residency in her wood shed. Within days she gives birth and Dolores helps the mother to nurse the two, three, four or five kittens until they are weaned, at which point she tries to find them all new homes, from an ever decreasing pool of locals. If the mother arrives early enough in the year then she could easily fall pregnant again, and deliver a second litter in July or August.

I’m a sucker for kittens, and so is Dolores, who now has four cats of which two are the left-over, un-homed, products of her stray.

Once the mother has completed her motherly duties, in the safe knowledge that Dolores will be an always-willing assistant, she disappears again until the following spring. That’s one cat that knows when she’s onto a good thing.

Since we moved out here in 2014 every litter that has arrived has been trumpeted to us, usually with cute and adorable photographs, in the hope that we may become a home to one or more of her annual menagerie. We’ve always resisted.

Initially we had our own elderly cat (Bonita) from England and just three weeks after she died a stray appeared on our doorstep and adopted us, the outdoor (and occasionally indoor) Kit the Cat.

Since then we’ve taken Dolores’s phone calls and; ‘not liked the colour’, ‘we only want a black one’, or ‘we’ll only take a tom cat’ (after the trauma of neutering Kit) and while we’ve visited her house and made all the right ‘oooh’ and ‘ahhh’ noises we have managed to resist taking on any more strays.

Then in September we took a phone call from cat-woman Dolores. ‘My stray has had a second litter…..and one of them is black……and I think it’s a Tom cat’ she said. There was a discernible ‘I’ve got you this time’ air of satisfaction in her voice. She’d managed to manufacture our ideal, all black, tom. We had no option but to visit.

We both instantly fell in love, with both the black one and his mackerel coloured brother, and we agreed to take them once they had been weaned from their mother, and after we’d completed our Camino De Santiago. 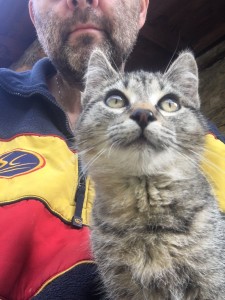 On the 14th October we made the short trip to one of Galicia’s last outposts and came home with a cat basket containing Lemmy (the black one) and Hendrix (the mackerel).

They will, of course, be outdoor cats. They are here to assist Kit in keeping check on the perennial rat and mouse problem that blights all rural areas. They now spend their nights in the bread oven house but have the run of the finca from dawn to dusk.

They are slowly growing up from the bundles of fur that arrived a month ago and are developing their own individual characteristics. 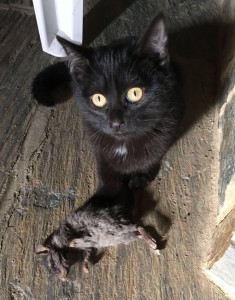 Hendrix would be a brilliant competitor in any ‘kitten food eating competition’ as his prime Lidl pate is gone almost before it hits the bottom of the bowl, Lemmy is more of a grazer which means that either Amanda or myself have to stand guard and stop Hendrix polishing off his food too.

Hendrix runs into situations like a bull in the proverbial china shop, while Lemmy is much more cautious and if his early efforts in vermin control continue then he’s likely to be a top-notch mouser.

They are both very chatty and like to announce an impending ‘toilet visit’ as well as calling to one another if either drifts out of sight.

Gradually over the last month Kit has come to accept their presence and can even bring herself to play with them on occasions (although perhaps a little too roughly), before getting bored and going off to sleep in one of her many ‘safe spots’ around the property.

They are massive bundles of fun, love a human cuddle, play fight with one another, and then curl up together to sleep.

But that’s where we draw the line, there will be no more, three is our limit. We already spend more on cat food than we do on the human stuff, let’s hope that they soon start feeding themselves.

1 Response to Additions to the Family