You may have thought that two forty-somethings giving up well paid careers, selling a perfectly nice house, trading in our fast cars for a battered twelve year old estate car, and decamping to a Galician backwater, would make us the local eccentrics. But far from it, we’re the paragon of normality in a sea of oddballs.

Why do I specifically mention this today…I’ll come onto that later.

We’ve known for a while that we have a number of neighbours, mostly male, who would struggle to spell Mensa, let alone register an Intelligence Quotient adequate to become members. I have a strong suspicion that the disproportionate surfeit of these characters is down to an historical reticence to dip even the littlest of toes into the gene pool, and where what was considered as a marriage of diversity was be getting wed to someone who hadn’t been brought up under the same roof.

There is the local neighbour who is under the care of social services and who is brought two hot meals a day and a daily stipend of eight euros. He waits patiently for his money to arrive and then makes the five kilometre walk into town to spend it on beer and cigarettes before making the return trip (contents unopened) and spend the rest of the day smoking and drinking. He recognises our cars, and if he sees I’m driving he leaps into the road and after forcing me to stop he gets into the passenger seat. We’ve never exchanged a word, but we have an unspoken agreement. I pick him up, and he rocks backwards and forwards in the passenger seat mumbling under his breath and getting increasingly agitated the closer that we get to his house. When he wants me to stop he grunts, then gets out of the vehicle and slams the door shut. It’s a bit of a one way relationship.

Then there is a guy in the adjacent village with the thickest Galician accents which makes him totally unintelligible, even apparently to Gallego speakers.  He brings us eggs (but only if you’ve an empty box to give him), shouts at us in Gallego and then chuckles to himself as he gets back in his car and drives off. When we were having the roof replaced he took it upon himself, as a seventy-five year old of considerable upper body bulk, to climb the scaffolding to talk to the builders. No health and safety here.

But today’s missive comes as a result of the exploits of a nearby neighbour who is currently the talk of the town due to his antics earlier in the week.

He was walking past the house yesterday while I was sitting out on the patio enjoying a post-work cup of tea, and he looked a little disheveled. I wished him the traditional ‘good day’ expecting a similar retort, but no, he wanted to chat. I use ‘chat’ in the loosest sense of the word as he then proceeded to remove his coat and talk at me for five minutes at machine-gun speed, in Gallego. The bits of his soliloquy that I thought I grasped were about ; his father being stung by wasps, his car having broken down, him needing to go to the hospital, and him hurting his leg (which he rolled up his trousers to show me).

It was clear that I’d made a terrible decision, he was happily walking past with his eyes down to the road and was oblivious of my existence until my polite greeting.

I nodded, and occasionally said ‘Yes’, hoping that he wasn’t asking me a question that I’d regret answering in the affirmative to. I could hear Amanda sniggering to herself in the house as she left me to flounder before showing some mercy and shouting me in.

It turns out that a month or so ago his car caught fire in Ribadeo and made the local news. I’d seen him in a courtesy car for a couple of weeks but hadn’t put two and two together. After it was written off he bought another one, probably for a few hundred Euros and on Monday that broke down and was taken away to a local garage to be repaired. 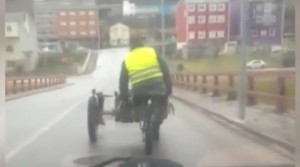 Now this neighbour likes to go the seven kilometres into A Pontenova for a mid-morning coffee and a chat to his mates and being without a car wasn’t going to stop him. So he fired up his unregistered, untaxed, untested and frankly dangerous three wheeler grass cutter, donned a florescent jacket, and headed off into town.

On entering town he drew the interest of a number of motorists, and their mobile phones, and soon the Guardia Civil were notified. He was apprehended in a local coffee shop, his location given away by his grass cutter being parked in the street outside.  His vehicle was confiscated, he was arrested, and after lengthy questioning he was released to walk home.

And that is where my badly mistimed pleasantry came in, and why I got blasted with both barrels. It was probably nothing to wasps, hospitals and broken down cars but a full explanation of the circumstances leading to his arrest and seemingly the police brutality which left him with a bandage around his leg.

He’s made the regional papers and apparently the national news (Telecinco) and has done his little bit to make Amanda and I feel all the more normal.

The bizarre thing is, I’ve since learnt that his name translates to ‘Perfect’.