The main reason for our trip earlier this month, apart from stocking up on traditional Christmas turron, and feeding our faces with the best food and drink in the discovered world, was to meet with our potential new architect (the fifth we’d met so far on our quest).

For reasons which may be explained in the future I am not allowed to tell you her name, suffice it to say that she is a graduate of the University of A Coruna, a member of COAG (Colexio Oficial de Arqitectos de Galicia), and that she lives about 60km, cross-country from our house. She is bang up-to-date with all the latest legislation (and there are many reams of it) , and she mirrors our taste for traditional Galician restoration. Oh…and she shares her christian name with my Aunt (although for most that will not be the best of clues). With the exception of the the name similarity thing, she ticks all the right boxes.

We’d arranged to meet her in Pontenova and immediately felt relaxed with her. The conversations were all in Spanish, Amanda conversing fluently, myself chipping in with the odd word to at least try and look willing.  We offered her a lift to the house and after Amanda trapped her finger in the seat adjuster (covering the pain so well even I didn’t know until after we were alone again) we took the seven minute trip ‘home’. 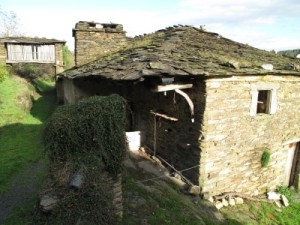 In the November sunshine

Our architect, lets call her ‘X’ as it is Galicia’s favourite letter, knew where the house was but hadn’t had a proper look around. As we showed her the house she made encouraging conversation. 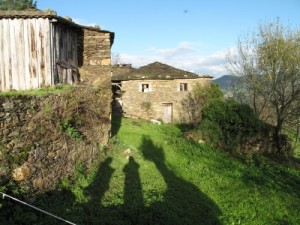 She agreed that the small house was indeed a small house, much to our relief, after I pointed out the house-like features (window seat, chimney, balcony, separate entrances). She loved our hórreo, and inside the house agreed that there was much potential including the capability for it to comfortably host six en-suite double bedrooms. She was almost as excited as we were, and we liked that! 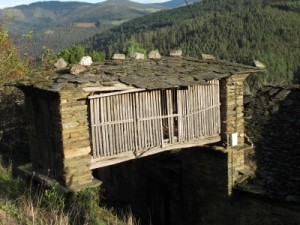 The bad news is that she thinks tha the full permission for the little house could take up to twelve months to obtain, and the license to allow us to convert the main house into a Casa Rural could get tied up in red tape for up to three years. This is due to the numerous committees that have to be consulted and then pass the application.

Mental time-scales re-adjusted, an architects quotation to assist us, and armed with photographs of her previous projects, we appointed ‘X’ as our new architect. She’s off to the small house this week to measure up and we hope to have some outline plans by Christmas before we travel out there again in January to sign the applications for the conversion and the minor works.

Now we feel like the project is getting underway….and just five months after the house became ours.

This entry was posted in Local Life, The House in Liñeiras and tagged 13, Food, Lineiras, Renovation, Trece. Bookmark the permalink.