We’re optimistic, possibly overly-optimistic, that this time next year we’ll be snuggling up in front of our newly installed log-burner for a Christmas holiday in ‘the small house’, as the snow falls outside and we await the arrival of Father Christmas bearing our winning ‘El Gordo’ lottery ticket.

Brought crashing back to earth with the current advice on getting planning permission it looks more likely that 2012 will see our first Galician Christmas, but whenever we do manage to hold our festivities Spanish-style, what should we expect?

One certainty is that the Spanish know how to celebrate Christmas. They string the whole thing out over a month starting on the 8th December and running until the 6th January, and there is plenty going on throughout the period.

This is a national public holiday which kicks off the festive period as Inmaculada is celebrated. Not Inma our Gestoria, but the conception by the Virgin Mary. Why this is just seventeen days before the birth of Jesus is a bit of an enigma, and I would prefer to remain ignorant, but perhaps she managed to hide her pregnancy well for the first eight and a half months?

This is also around the time when local governments, civic societies and individuals use any possible vacant public space to erect a ‘Belen’ (Bethlehem in Spanish), a nativity which is extended to over the coming month with the major players being added as they came on the scene. 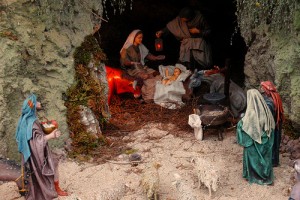 One uniquely Spanish sub-plot to the whole nativity scene is the addition of a Caganer, a character squatting to defecate, which is added to all Belen for the children to find, and which symbolises fertility. Novelty caganer abound and you can get one fashioned to represent almost any public figure you wish. 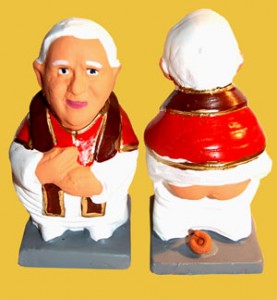 Pope having a poo

In some parts of Spain, notably Granada, there is a celebration of the shortest day symbolised by jumping through fires to protect oneself from illness in the coming year. All sounds a bit pagan in a Catholic country to me.

The day when all Spaniards cross their fingers that they will be the ones to win a share in the largest lottery of the year. This was traditionally massive, with sums of money being won way beyond what used to be possible elsewhere. This has now been somewhat eclipsed in financial terms by EuroMillions but it is still a big Spanish institution with bars, restaurants and offices all usually buying an expensive group ticket to be shared amongst colleagues and patrons.

A night for a family get together as restaurants and bars all close early (as we discovered to our cost, and hunger, when we lived in Madrid in 1992). Traditionally a night for drinking Cava and fine Rioja while eating prawns, lamb and turrón, although not all on the same plate.

This is where it all starts to get a bit weird if you are used to a traditional English Christmas. Santa may arrive with a small token present for the children but this is another day for families and not for the northern European tradition of exchanging gifts. I suspect that this is mostly down to the Spaniards wanting to bribe their children into behaving for the whole school holidays and not just until the 25th December. 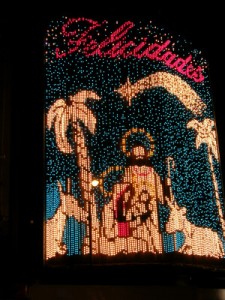 There is no ‘boxing day’ in Spain, instead the next party is on the Holy Innocents Day, the Spanish equivalent of our April fools day. Practical jokes, youths taking on the roles of local council officials and ordering around their parents, and big bonfires all figure prominently. This is also the day not to believe everything that you read in the newspapers or see on the TV news.

Although you may think that every night is party night for the Spanish the last one of the year is really special. Clubs, bars and restaurants all get extortionate in the way that they do in England but as the midnight hour approaches all city, town and village squares fill with people armed with 12 grapes (one on each chime of midnight) and bottles of bubbly to wash the grapes down with. The party is then unlikely to stop until dawn and the following day is spent sleeping off the previous nights excesses.

5th January – Eve of the Kings

Spanish town and village streets fill with processions as sweets are thrown from floats to notch up the excitement of the day to follow just a little further. Each town has its own variation to signify the arrival of the three kings in Bethlehem, bearing those all important gifts. 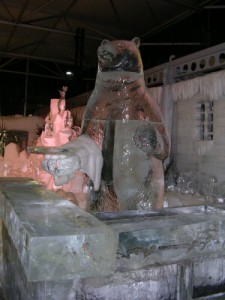 The day before the kids go back to school and it is time for the dishing out of the presents which have been left by the kings. Balthasar is the favourite, riding a donkey, as it is he who is believed to leave the gifts, making Santa seem a little second rate for Spanish youngsters. Once the presents are opened there is just one more sleep and it is back to school and work, and the festivities are all over for another year.

This entry was posted in Food & Drink, Local Life and tagged Food. Bookmark the permalink.

2 Responses to A Spanish Christmas