The architect who can’t be named e-mailed through the ‘final’ (fingers crossed) papers for us to sign and send back via snail mail to enable the submission of the planning application for the small barn.

These were; a three page document in gallego (licenza urbanistica) confirming that we own the land and are submitting the application with all the correct documentation; the second, in castilian, was a one pager in which we were agreeing not to inhabit the house until all services were laid-in, and that we’d be responsible for any damage caused to the local infrastructure by, and during, connection.

I opted to send the documents by ‘International Signed-for’ at £4.95 to ensure that they hit their destination. They went on Monday with the suggestion that it was likely to take four days so I logged on to the tracking today to check its arrival to be given the message;

‘Your item, posted on 28/02/11 with reference RI**********GB has been passed to the overseas postal service for delivery in SPAIN AND CANARY ISLANDS.’

which I interpret as the Royal Mail saying, ‘We’ve managed to get it as far as Spain, we’ve washed our hands of it, now it is in the lap of the Gods’. I’d better e-mail the architect to see if it has arrived!

As we’ve currently hit the development doldrums while waiting for the Spanish authorities to do their stuff, I thought I’d go through the many photos that we’ve taken on the eight trips we’ve so far made to Galicia. In doing so I spotted a worrying trend…we’re breeding washing machines!

When we bought the house back in June 2010 there was a single old washing machine in a partitioned corner of the house. We considered it ‘one of those things’ that came with the house and that we’d eventually have to pay for the disposal of. 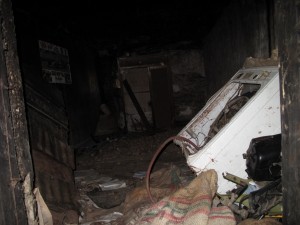 Surely this can’t be normal? 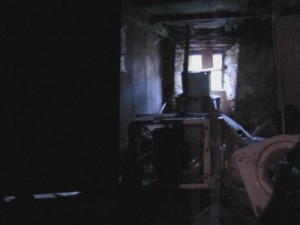 Despite numerous conversations with locals and other Brits, we’ve still not determined how you get rid of unwanted white goods in Spain. The norm seems to be to either leave them outside until they rust to dust, or dig a big hole and bury them, as there are no municipal dumps or recycling centres.

I can see these, and any further mechanical children that they have before we clear the house, making the long journey back to England and causing consternation and amusement at our local ‘tip’ in Huddersfield with their two pin plugs and Spanish decals.