The hold up in the registry office

Do you remember me suggesting in early February that our planning application for the conversion of the small house into our small dwelling was finally ready to be submitted for the consideration, deliberation and rumination of Pontenova Concello?

Well, it appears that I may have somewhat jumped the gun.

At the end of February we sent back the ‘duly signed’ forms and the architect, who cannot be named, confirmed that she had them. Then everything went quiet and we foolishly assumed that the wheels of bureaucracy had been set in motion on our behalf.

Then yesterday, out of the blue, arrived a seven megabyte e-mail from the architect which I optimistically tried to download onto my iPhone while sat in stationary traffic on the M62. After killing my fellow struggling commuters 3G connections for a good twenty minutes I gave up, resigned to wonder at the contents until I got home.

Once back in the land of broadband, what awaited me was a mass of documents of all shapes and sizes which apparently comprise our application, and which is now on the verge of being submitted…no really! 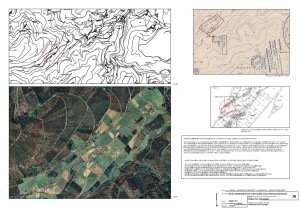 One of twenty pages of Galician Planning Application

It appears from the accompanying e-mail that our architect has been waiting to include  the ownership documents from our gestoria in Ribadeo. Who in turn was waiting for them from the Spanish equivalent of the Land Registry. Who themselves have been trying, seemingly unsuccessfully, to register us as the new owners of Casa Liñeiras ever since we signed on the dotted line in the, friendly but smokey, Notarios office back on the 21st June last year (ten months and counting).

In the end the architect has given up and decided to take a chance and submitted the application without the ownership proof in the hope that it will arrive soon and she can sneak it into the application bundle before it starts its magical bureaucratic mystery tour around Galicia.

Amanda and I, well mostly Amanda, then spent an hour trying to understand what the extensive documentation was all about before giving up and looking at the plans and a new set of pretty photographs which the architect had taken (she’s earning her money on this one). Satisfied that such an extensive bundle of paper must mean that the architect knows what she is doing, we emailed back our blessing.

And that is just for the small house, imagine what a palaver it is going to be for the casa rural when we get around to it. Perhaps we should start now!

This entry was posted in The House in Liñeiras and tagged 13, Casa Lineiras, Concello, Lineiras, Trece. Bookmark the permalink.

1 Response to The hold up in the registry office