We’ve had some paperwork through, yes…more paperwork.

The good news is that this one bears an official stamp of the local council, the ‘Ayuntamiento de A Pontenova’. According to the architect who cannot be named, what this signifies is that our planning application to renovate the small house was finally submitted on the 29th March 2011, and this means that we can ‘officially’ start waiting. 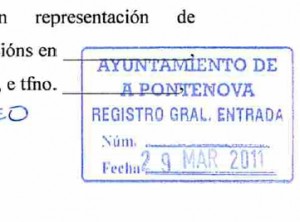 It isn’t going to be all plain sailing though. At the moment the application can’t actually progress further than the local council as our ownership documents are not attached. These are still being awaited from our solicitor in Ribadeo, who is in turn waiting for them from the land registry. I think I’ve explained all this before. Breath won’t be held, as it is likely to be six to eight months.

What this does however signify is that we owe more people more money, which seems par for the course. I don’t begrudge paying the architect, I think that she has worked extremely hard for the amount in the bill that she has sent us, but we’ll soon owe a percentage of the renovation costs to the council for the application.

In other news, as they say on the telly before telling you the ‘happy’ end of bulletin story, it appears that our minor works licenses may, just may, have been considered. We don’t know the outcome (everything crossed that it is good), but the architect believes that both the ‘repair’ of the roofing on the small house and horreo were considered at a meeting last week, and we should hear soon.

As if by magic a local builder, who we asked for a quote three months ago, did finally send through their proposal to undertake the minor works. Perhaps they listen to the same grapevine as our architect?

I’ve also been trying to find a way to get an advance screening of the new Martin Sheen film about walking the camino, ‘The Way’ but so far every option it seems would involve me breaking a number of copyright laws, the words being out of syncronisation with the images, arabic subtitles, and opening myself to being ‘grassed up’ by my internet service provider. It looks like the opening night on the 13th May will be my first opportunity. From the trailers it looks like the big screen will be required to do it justice. As soon as I have seen it I’ll review it here.

This entry was posted in The House in Liñeiras and tagged 13, Concello, Galicia, minor works license, Renovation, Trece. Bookmark the permalink.