I’ve managed to get a sneak preview of the new Martin Sheen/Emilio Estevez film ‘The Way’ which opens across the United Kingdom this Friday night (the 13th May). I’ll try and review it here without spoilers, and giving away nothing more than you’d already know from watching the trailers that are widely available on the Internet, and have been signposted previously on this blog. 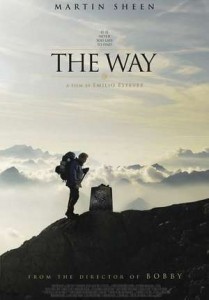 I’ll start with a confession. You are not going to get a Mark Kermode/Jonathan Ross type film review from me as  I am bound to be somewhat biased.  I desperately want this film to been viewed by everyone and anyone, and for it to gain critical acclaim. Fundamentally it is about my beloved Spain, and especially Galicia, the place where my heart lies and where my head spends most of its time. I am cleary going to marvel at the magnificent landscapes, and delight in the many references to Spanish culture, and wonder at the mysticism of the camino.

For an independent perspective the film is currently rated as 7.2/10 on IMDB and 90% on Rotten Tomatoes with nine out of ten reviewers giving it a ‘fresh’ status. Compared with the majority of the current dross around at the cinemas this makes it potentially Oscar winning material (although I am sure it won’t get a nomination).

The film tugs at your heart strings from the opening few frames and even a stone-hearted individual (according to Amanda) like myself had a tear in the corner of my eye. There are moving moments throughout the whole 140 minutes as the cast slowly grows and strengthens through incremental additions of  ‘Peregrinos’ (pilgrims).

It’s even a film that my Mother would like (her normal staple diet is romatic comedies) and I can assure her than no-one dies, not a spot of blood is spilt, and there is very little swearing. If I had not already seen it I may even be tempted to take her, without any fear of recriminations.

What the film did achieve, I am sure much to the delight of the Galician Tourist Board, was to make me want to walk the Camino. Not from the French border like Tom did (I’m not that fit), but perhaps starting at Ribadeo. Not for any religious reason but for the experience, much like many of the characters in the film. And I never thought I’d crave a walk which didn’t involve a set of clubs and a little white dimpled ball.

So I urge you to find out where this film is showing and get yourself a ticket. I’m certain that you’ll enjoy it, and perhaps you’ll be encouraged to take a walk across northern Spain with your world in your back-pack.

1 Response to ‘The Way’ – A biased review