I was introduced to percebes by none other that Jeremy Clarkson, not personally, but through a TV programme which showed him being winched down the Galician cliffs in a wet suit clutching a small net and a rock hammer. When he’d been battered by the Atlantic waves and clambered back to safety he cooked up a handful of percebes on a primus stove and waxing lyrical.

What really puts you off is the price, these things can command an outlay of up to 100€ per kg, so they are not something that you’d eat on a daily basis. On an early trip to Santiago de Compostela I tried 10€ worth in a restaurant near the cathedral and was instantly hooked.

When we went out to Galicia in May we were recommended (thanks Stephen & Kay) a restaurant in Rinlo (ten minutes west of Ribadeo) called ‘A Confradía’ and on being seated we were brought a plate of percebes ‘on the house’ while we waited for our main course to be cooked (more of that in a later blog). They aren’t the easiest food in the world to eat and you have to put in quite a bit of work for the reward. But here is my non-expert eating advice; 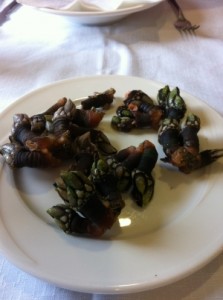 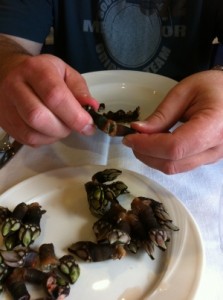 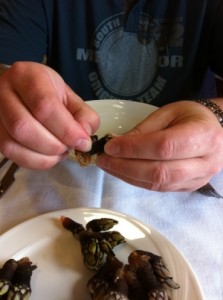 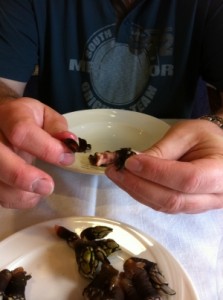 Each year Rinlo holds a Percebes festival where all that is served is this local delicacy. Although there are inevitably some people who dislike percebes, believe me, they are well worth trying because if you like them, you’ll love them!