Pontenova and its puente nuevo

It shows the depths to which we’ve sunk when we treat a new bridge as a tourist attraction.

If it was the Golden Gate Bridge, the Ponte Vecchio or the Humber Bridge then we could be excused, but not when it is the new bridge in A Pontenova. You remember, the one that caused so much controversy six months ago, and which is still upsetting the locals.

What used to be the main bridge across the River Eo, which splits the town in two, was just about wide enough to convey two cars. On the eastern side of the bridge was the main car parking area for those doing shopping on the western side.

In their wisdom the local council, and Galician government, decided to build a new bridge about 500m upstream, demolish the existing road bridge and erect a new footbridge. 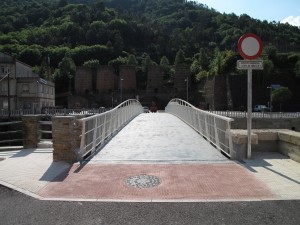 No longer a vehicle crossing 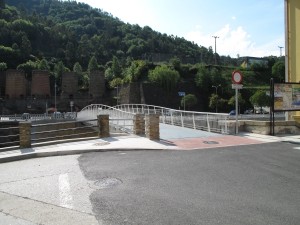 Much prettier than the old road bridge

But the locals are far from happy. They can no longer drive over the bridge to the parking without making a 1 km diversion, and they have now decided that the new road bridge (see below) was only built as a local and unfair tax generation mechanism. 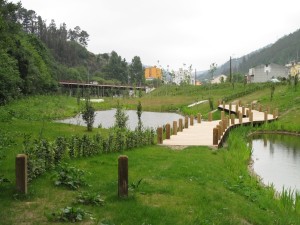 New road bridge in the distance with landscaping

The road layout is classed locally as excessively complicated for those wishing to drive to the other half of the town, and with so many ‘STOP’ signs (which the Spanish love to ignore) and a permanently placed ‘camouflaged’ police van parked near the bridge handing out on-the-spot fines for those who fail to obey. Once again their is uproar, with the finger of blame being pointed directly at the embattled mayor.

So it was with great trepidation that we negotiated the bridge, at least half a dozen times, on our last visit.

Do you know what? There are a couple of ‘give ways’ marked on the roads, and no sign of undercover police anywhere. We escaped fine-free. Perhaps it is the case that in Spain the STOP signs are considered an irrelevance, or perhaps the Spanish just aren’t brilliant drivers?

One thing is for sure, I’d never want to drive any distance on a Spanish Fiesta weekend!

This entry was posted in Current Affairs, Local Life and tagged Pontenova. Bookmark the permalink.