Getting a taste of the brotherhood

I’ve mentioned ‘A Cofradía’ at Rinlo in an earlier blog, when demonstrating one of the ways to eat the delightful percebes. On our visit to Galicia in May the percebes were simply an appetiser to the main course, the speciality of the house, ‘Arroz Caldoso de Marisco’.

A Cofradía means ‘the brotherhood’ and relates to the fishermen who set sail into the unpredictable seas of the Costa da Morte (Death Coast) to bring home the finest seafood available in Spain, and probably in Europe! 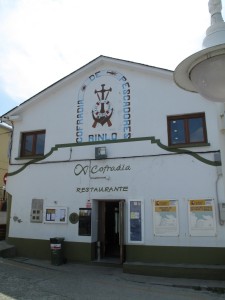 Never judge a book by its cover

From the outside the restaurant looked clean, if a little unappealing. Inside the downstairs bar area is predominantly hewn from big chunks of wood with an ‘L’ shaped bar and walls covered with posters advertising the annual ‘Percebes Festival’. After a thirst quenching beer we enquired about eating and were ushered to the upstairs restaurant where it appeared we were unfashionably early at 13:45. The place was deserted, but we needn’t have worried.

The restaurant was like a different world. Airy, bright and with pristine white over blue tablecloths and shining silver cutlery. We took our seats by the open window with a view of the narrow rocky harbour. 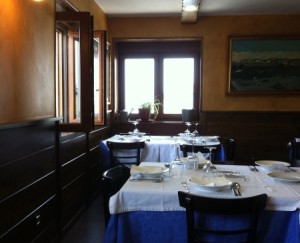 We’d already been let into a little secret by Stephen and Kay. They had told us the previous evening that we must try the ‘Arroz Caldoso de Marisco’, a dish cooked for two people, and essentially a cross between a seafood risotto and a seafood soup with rice in it. We ordered with anticipation as 14:00 approached, and the tables in the restaurant began to fill. 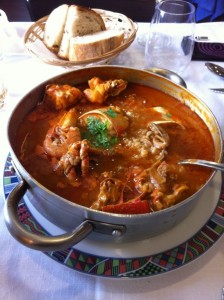 What arrived was better than we could have hoped for. A massive steaming iron cauldron of rice, prawns, clams, and what must have been a whole lobster, cut into chunks and cooked in the most fantastically rich stock. Big chunks of white bread, and a bottle of Albariño to wash it all down, and we’d had one of the finest meals in Galicia, probably one of the most enjoyable meals ever.

As we sat back to admire the empty pot and stack of lobster shells we took a moment to look around the now full to bursting restaurant. And guess what? Every single table had the same pot as ours, and everyone eating, almost in reverential silence, was wearing a broad grin from ear to ear.

It makes you wonder why they bother with a menu at all!