After years of repression under General Franco, his death in 1975 caused an outpouring of creativity and self-expression. One element of this revolution was the sweeping away of sexual repression and prudishness (which on occasions can be considered as a bad thing), but more often enables you to chuckle at advertising which would be considered inappropriate in many other cultures.

A prime example of this are two posters which we stumbled across while visiting Santilla del Mar, both of which were advertising sweets available from inside their respective establishments.

Exhibit 1 – ‘Balls of the Anti-christ’ 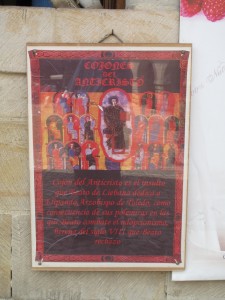 The ‘balls of the anti-christ’ is an insult from the eighth century which was levied at Archbishop Elipando of Toledo by the Beatus of Liebana (Cantabria) for his thesis that Jesus Christ was the adopted son of God rather than the natural son of God. Why this manifests itself as sweets is anyone’s guess. 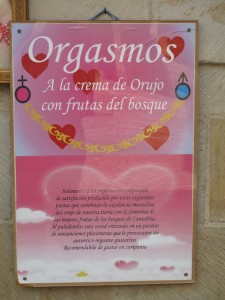 A second shop was selling ‘orgasm’ sweets made from ‘Crema de Orujo’, a weird Galician liqueur made from herbs, mixed with fruits of the forest. I think that the trade description act could have something to say about the claim that ‘only an orgasm is comparable to the satisfaction of eating these sweets….’.

Needless to say, we declined both of these tempting offers!

This entry was posted in Food & Drink and tagged Asturias, Food. Bookmark the permalink.