It looks like I might have been a little too ‘cocky’ about how well the Landy was running. On the way back from the house today there was a distinct lack of power and after I stopped in Pontenova on the way home she really didn’t want to accelerate at all. Fortunately the locals, a couple of who I held up, were very civilised without even the hint of sounding a hooter or flashing their lights.

After finding a safe place to stop I had just about resigned myself to needing to call ‘international rescue’ when I managed to get enough revs to make it up the hill back to Taramundi. I’ve since been out twice to test whether she’s recovered, but it looks like I will be calling the local garage on Monday (puente allowing) to see if they can come and collect her and sort her out. As always, the pessimist in me is fearing the worst.

Much better news on the house. I can’t believe the progress that the builders have made since they started just a week ago. At this rate they will be finished in a couple of weeks! 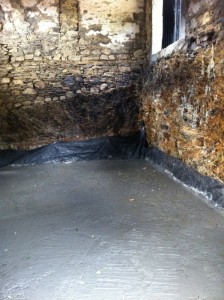 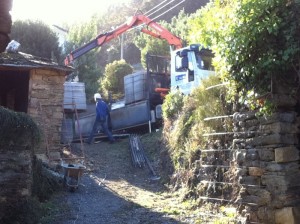 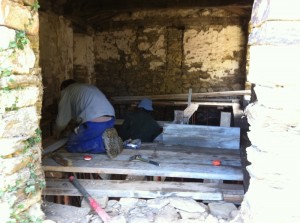 Facundo and Pepe putting in the shuttering for the first floor

There are also a few things to report about life away from the house;