It’s a sight that I have never seen before. My Landy was parked at the back of a long queue of 4×4’s and MPV’s away from the vertically challenged saloons and estates, who after all had paid less than us.

It’s position for the thirty-two hour crossing was just under the shelter of the deck above, but exposed to the elements and the worst that the Bay of Biscay’s back-draft could throw at it. And when I returned, fingers crossed it would start after my last minute bodge, it was covered in a two millimetre coat of salt.

The door locks were rusty, the screens impenetrable to the human eye, and the brand new padlocks securing the doors on the back were seized. Even I know that salt and cars don’t make the best of bedfellows. 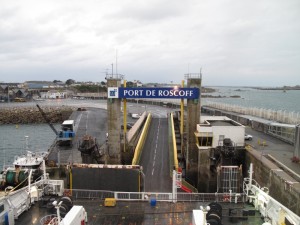 But joy of joys she started, on the very first turn of the key, and only with a small whiff of petrol. I removed the chocks from all four wheels, feeling only slightly offended that mine was the only vehicle on the entire deck deemed incapable of maintaining its position without assistance. And we were ready for the off.

I passed customs and passport control without a hitch and as I left the port I was flagged down by John, a foot passenger I’d shared an onboard quiz with (and our two man team only lost by one point against a team of six) and who had just been told that his only way into Bilbao was by taxi at twenty euros. All he had left in his pocket was twenty euros, and that had to get him to Madrid. We lifted his suitcase, heavy enough to be concealing a body (but I didn’t ask), into the back of the Landy and off to the nearest station we went.

Interloper abandoned to the vagaries of Spanish public transport at 7am, with me feeling slightly guilty that I hadn’t taken him all the way to Bilbao, and it was just me and my steed for the long journey to Taramundi, through Cantabria, Asturias and finally a little bit of Galicia.

It was good to be back. The open roads, the decent weather (for now) and the smell of the eucalyptus occasionally succumbing to that of burning oil, LPG and occasionally petrol. We made good progress, and even managed to overtake one truck. But it took me back on the next hill and disappeared into the distance. Every now and then we managed 70mph, but it was only with a tail wind, and on downhill sections. a steady fifty-five was the norm.

Approaching Galicia the heavens opened and the Landys’ little windscreen wipers failed to be up to the task, but at least the worries I had about the salt eating into the bodywork were ebbing away.

A quick stop at the Chevrolet garage in Ribadeo to load up with liquid petroleum gas (to the tune of fifty euros for a full tank), and I was making the final 30km leg of the journey to my digs in Taramundi, the house of my estate agent, and ‘me casa’ for the next two months. Nine hours after driving off the boat I had reached my destination.

It’s now friday and I’ve been here for three full days. I’ve so much more to tell, and pictures to share, and will blog much more over the weekend.

One final question, does anyone know how long it takes, after thirty-two hours of five metre waves, before you stop feeling as though you are on a boat?

This entry was posted in Local Life and tagged Asturias, Cantabria, Galicia, Roads. Bookmark the permalink.