Somewhere between collecting the hire car in Lugo on Friday afternoon, and retrieving it from the hotel car park on Saturday morning it had gained an unwanted addition. Despite my hire agreement telling me that I would return the car in exactly the condition that I received it, or face the loss of my 750 euro deposit, the blue Audi A3 (nice car, nice drive) was sporting a 10cm wide by 30cm long red paint stripe down the drivers side rear bumper.

I am pretty sure that it wasn’t me. I don’t remember and additional resistance while driving, the car was parked between two unmoved black cars at Santiago de Compostela airport when I collected my weekend visitors, and despite some congestion driving into the city I managed to keep the obligatory five millimeters between my car and those chaotically dancing around me.

I can only think that the offending stripe was obtained by the hotel courtesy driver who relieved me of my keys at the hotel reception and whisked my car to the car park, whose entrance is a closely guarded secret from mere hotel guests. But I couldn’t prove it.

My car hire company have a new policy which was clearly explained when I collected the car. The hire agreement has a nice diagram of a 50mm by 5mm rectangle which must cover the full extent of any damage, anything larger and you can wave goodbye to your deposit. Much as I tried I couldn’t get the new red stripe to fit anywhere near within the box.

The shops had already shut for Saturday and I knew that the big supermarket in Ribadeo was closed on Sundays so hatched a plan to drag Amanda to Pontenova early in the morning (10am) to check the main street auto parts shop that I had seen previously, in the vain hope that it would be open.

Miraculously it was, and we explained the problem. The very nice man in the shop said ‘you need polish’. But I knew better. I knew that polish would put a nice sheen on top of my red stripe and make it silky soft to the touch, I told him that I didn’t need polish.

He went through his book of ‘supplies’ looking for anything else which might help me (such as ‘red stripe remover’) but drew a blank. Again he told me I needed polish and thought that it would work, I shook my head, thanked him for his time and said I’d think about it. I was mentally waving goodbye to my 750 euros.

The last chance was the Repsol garage two hundred metres further down the road and we decided to give it a last desperate try. We entered the small shop and explained the problem again, blue car with a red stripe we’d like to remove, adding ‘T-Cut’ for good effect. 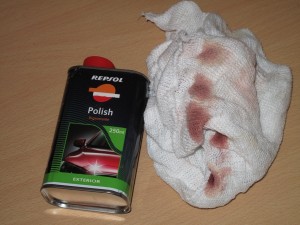 ‘You want polish he said’, we both shook our heads. ‘Yes, yes, polish’ and he handed me a tin. It had instructions on the back in five languages and perfectly described what T-Cut does, ‘Liquid polish for cleaning and removing the surface layer of aging from painted surfaces’. ‘Yes, yes’ I said, feeling somewhat guilty about the attentive first man we’d just walked out on, and who had been right all along.

It worked perfectly, with the alien red stripe completely removed and the blue paintwork unbroken underneath, and all for just five euros, a kitchen cloth, and five minutes of elbow grease. Two hundred kilometres of road grime later and it’s impossible to tell that it was ever marked.

Lets just hope she stays unscathed parked in Taramundi tonight and I can get her back to Lugo in one piece tomorrow.

This entry was posted in Local Life and tagged Car, lugo, Pontenova, Ribadeo. Bookmark the permalink.