I’m reading a book at the moment about the trials and tribulations of an English guy walking the camino from the French border to Santiago de Compostela with a stubborn donkey which lies down at inopportune moments and won’t cross any of the many wooden bridges that facilitate the shortest routes.

He thought that it was difficult travelling with a donkey? It sounds to me like a nice Sunday afternoon picnic. He ought to try living with a twenty-five year old Landrover around Taramundi for eight weeks. You’ve guessed it, yet another car-trouble blog post on a building renovation blog site.

I set off for the house nice an early (around 10:15am) with the intention of getting in another full days work. The car mis-fired a couple of times as I went through Mousende (2km from Taramundi) and got increasingly worse as I passed through Conforto (5km) before a loss of power forced me to pull over. I quickly diagnosed the problem as the points, the same issue that I had five weeks ago when Amanda had to send a new set from England. I’d a new spare set at the house in Taramundi and cleaned the existing points before setting off back to get them.

Just after Conforto the car let out a massive mis-fire which blew apart the silencer. It was like a bomb had gone off, both in sound and devastation. Power deserted me and I was stranded on a blind bend. I phoned Neil…again…who must be getting pretty annoyed with my constant breakdowns, and yelled another ‘May-Day’.

When he saw the state of the silencer he couldn’t help but laugh, the exploding exhaust gasses had opened it up like a sardine tin and bent it out of shape. Neil attached the tow rope and dragged me back to his house. And this is where it all got rather surreal.

Rather than crawl under the Landy to remove the silencer, Neil decided that the best course of action was to use the crane on his DAF truck and lift the rear axle skyward to enable unfettered access. 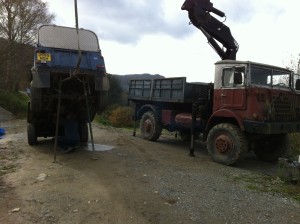 The exploded box was quickly removed, squashed closed with one of the DAFs hydraulic feet, and a temporary piece of steel welded over the seam. Once the box was refitted and the Landy back on an even keel, we opted to fit the new electronic points conversion which Amanda had also shipped over five weeks ago (but not without additional difficulties) and she was back up and running, with just the odd burble from the make-shift exhaust.

This was the ‘third thing’ of my ‘bad things always come in threes‘, and now I am safe again for uninterrupted motoring, hopefully at least until I am back home in Yorkshire next weekend.

That said, I understand that the locals have organised a sweep-stake where people guess on the number of kilometres I will get towards Bilbao on Friday (for the ferry), prior to my first breakdown.

My departure time from Taramundi is creeping earlier each day as I try to factor in a breakdown and the inevitable low-loader to the port that will follow.

This entry was posted in Local Life and tagged Asturias, Neighbours, Roads. Bookmark the permalink.