History on the doorstep

I’ve always liked history. What I like is to visit historical sites and gather enough visual evidence to enable me try to imagine life being lived as it was in previous centuries or millennia. I should really have been an archaeologist…but my knees aren’t up to it, so I have to get my history kicks by conventional tourist means.

We’ve visited Taramundi (almost the last stop in Asturias before you enter Galicia) on at least half a dozen occasions and I have been using it as my base for the last seven weeks. I’d heard rumours of a Castro (ancient Celtic hill settlement) on a number of occasions but despite a couple of casual attempts, it had proved somewhat elusive.

That was until sunday afternoon when I decided to walk to Neil and Rosas taking Neils suggested short-cut with a near vertical footpath down into the valley bottom, matched by one equally as steep up the other side. Not a journey I’d like to attempt after a good evening crawling around Taramundi’s four bars.

As I left the southern edge of the village I spied to my right a grass footpath and a sign for the Castro, so followed it and there it was, within 100 metres of my apartment door. 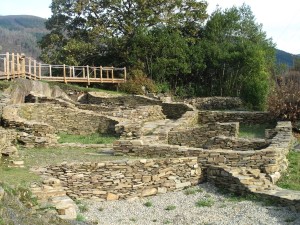 Reputed to have been built in the eighth or seventh century B.C. it occupies the edge of the hill with a brilliant view down two valleys, but still benefitting from some shelter from higher ground to the north.  The site is around two hectares in size making it a major bronze age settlement, and contains an area of baths and a sauna. The site was protected all around by a large (6m wide by 4m deep) defensive trench over which the modern road now runs. I’d hypothesise that the castro originally continued further up the hill towards the main road through Taramundi but that centuries of building and habitation will have wiped out any further trace. 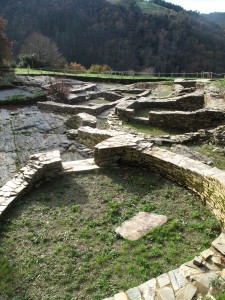 The strategic importance of the site saw it become a major trading centre during Roman times and it was inhabited for over one thousand years before it fell into disrepair in the third century A.D.

The site was re-discovered in 1969 but the major excavations took place in 2000 and have recently led to the development of a visitor centre with a classroom attached.

It is a spectacular sight, but some of the reconstructions (to protect the dry stone walling of the circular dwellings) won’t be to everyone’s liking. Much of the site still remains under soil and is awaiting the archaeologists trowel. From the bit that is visible it is possible to use a bit of imagination to picture; the immaculate thatched roofs; children and animals running around and having fun in the summer sun; smoke from the ubiquitous fires; and, the smell of food wafting on the air.

All this right on my doorstep, and a sight which will be missed by many of the tourists who visit Taramundi throughout the year who are more interested in good food and buying the knives for which Taramundi is famed.