The third night of our visit found us straying outside Galicia and staying in the fantastic Asturian village of Taramundi at Casa Paulino, a great little hotel which was recently renovated and which has excellent views at 38€ per room per night. 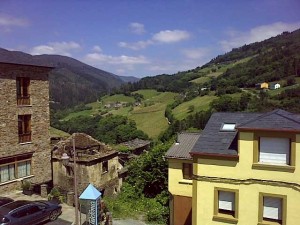 On our late arrival, after a long cross country drive, we met up with Ramon of Spanish Country Cottages and after a couple of beers hit a local hotel restaurant for Fabas con almejas(Beans and clams). It very soon became apparent that Ramon is far more comfortable a talker than he is a listener. His 100mph English, with a heavy Spanish accent, does take some acclimatisation.  What it shows is his great enthusiasm for the area, and despite us being a lot further east than we originally wanted he’d already sparked our interest in the Turia Valley, and everything that we now knew that it had to offer.

Three hours of listening later, with the occasional interjection while Ramon chewed a mouthful of beans, and we made our tired excuses agreeing to meet the following morning to see the long list of properties that Ramon, and his local ‘fixer’ Julio, had lined up for us. The morning seemed to arrive very quickly after a good night sleep, and at a very civilised 9:30, full of fresh coffee and pastries, Ramon introduced us to Julio who would be our driver and guide for the day. We immediately liked Julio, and despite him not speaking a word of English (although we suspect he understands more that he lets on),  he had the kind of face and demeanor that you instantly trust. He looked vaguely like my Dad (who passed away in 2004) and had the same open demeanour and friendly grin. He also told Ramon to ‘be quiet’ on several occasions, although not quite so politely.

The double act continued as we hit the road in Ramons hired A-Class Mercedes, Julio at the wheel, driving like a Spaniard. Ramon and Julio have properties throughout the Turia Valley which spans Galicia and Asturias but we’d made it clear to Ramon that we were only interested in Galicia, so we headed through A Pontenova, on to Vilameá and then to a small dispersed valley village called Liñeiras. 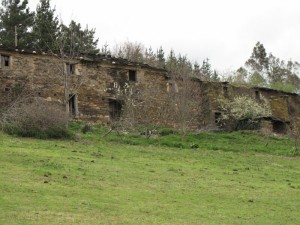 We drove along the south edge of the property in question, around a tight right hand bend, and up a steep road to see the property from the side. 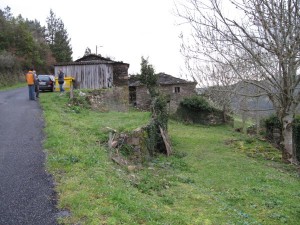 And then we parked up, got out of the car and saw the full glory of the house from the main entrance to the land. 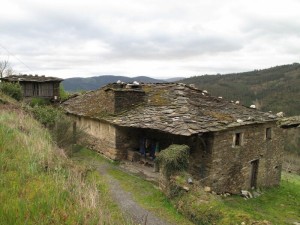 There was no shaking of heads, no pulling of faces, no negative telepathy, just big wide grins. It was Ramon and Julios first property of the day and already they had played an ace, pulled a rabbit out of the hat, scored a screamer from outside the box! This was exactly what we’d been looking for, and our new ‘best friends’, the double-act from the Turia Valley, had found it for us at the first time of asking.
What they were showing us was ’13 Liñeiras’ (trece pronounced tre-th-ay),a complex of houses and ruins set into the quiet rolling hillside with beautiful views down the valley and across the forests. Even in March, with bare trees and any wildlife with a brain still asleep or sunning itself in Africa, you could tell that it was a special spot. There was one main house, single storey on the top side and two floors down the slope which had a reasonable roof (only half a dozen holes) and faced south. Next to it were two further houses, in ruin and overgrown with vegetation, and beyond those a large  ramshackle lean-to. 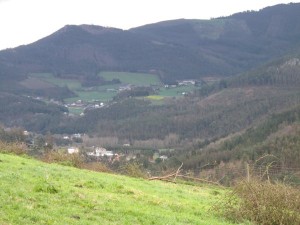 Valley view from the house

Opposite the main entrance to the house was another ruined house set into the banking which contained a stone bread oven. Attached to the main house was a beautiful horreo which rose three metres in the air and spans the track which runs down next to the house. There is also a barn (roof intact), and two further ruined houses about twenty metres away from the main house. The land area was over 7,500 square metres (almost 2 acres), gently sloping and of good arable standing.
We felt like we’d hit the jackpot. If this was the first, had they gone all out, or were they saving even better for later?
We must have spent over an hour exploring and investigating before being ushered away to see another half a dozen great properties. Some of the others had nicer houses, or more land, or even better views, but none of them had the full package that ‘trece’ had to offer.
Now we had some serious thinking to do.
This entry was posted in Background, The House in Liñeiras and tagged 13, Asturias, Galicia, Lineiras, Pontenova, Ramon, Trece. Bookmark the permalink.