‘To buy or not to buy’, that was the question

All of a sudden things had become real, very real. We were moving into the terrifying transition phase between the romantic notion of an idyllic Spanish house in the country, and the handing over of a large amount of hard earned cash for a ramshackle wreck on a Spanish hillside. 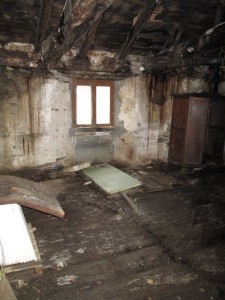 We’d spent many days and nights dreaming about what our ideal property would be like; the size, the space, the views, the renovation work, the final elegant look, and opening the doors to our first paying guests, but up until now it had all been a dream. We had been shown a property which we both instantly knew was right for us and our project, and now we had to make a decision as to whether we were being realistic or not.

I was quiet for the majority of the trip back to the UK, iPod in ears, eyes closed, £ and € symbols racing through my mind as I tried to make sure my heart and head were synchronised for what was the largest decision of our lives. I know that sat next to me Amanda’s brain was going through exactly the same turmoil, we didn’t need to speak. It is amazing how sometimes I can know exactly what is going through Amanda’s mind, and on other occasions my mind-reading powers totally desert me.

On the drive back from Stansted to Yorkshire the final decision took just four words.

Mine came first, ‘So then’ I said.

Two seconds later Amanda responded ‘Yes’ to which I quickly replied ‘Yes’. We both grinned at one another and my concentration returned to the A1.

There was still some work to do before we could make an offer.

What we had to do quickly was find ourselves an gestoria, an essential ally in the Spanish house buying process. A gestoria is basically an under-solicitor (although ours in a qualified solicitor and runs a separate legal practice) who helps you through Spanish bureaucracy, whether that be buying a house or a car, or simply dealing with utilities or the council. The gestoria is from an age when the average Spaniard couldn’t read or write and couldn’t be bothered with the trappings of administration for fear that it would interfere with feeding their pigs or chickens. Despite the increase in literacy, and possibly also due to the exponential increase in ‘red tape’, the gestoria has remained an integral part of Spanish life. Ours is called Inmaculada (Inma for short) which as you’ve probably already worked out means immaculate – how could we go wrong?