I am back ‘in country’ and it is an absolute delight. At tea-time last night it was twenty-five degrees and today is definitely t-shirt weather.

The ‘tyre punctured’ message on the dashboard on the A42 to Birmingham on my way to collect the wood burning stove turned out to be the Germans having a ‘bit of a giggle’ at my expense. The stove took four of us to cover in industrial bubble wrap, and load into the back seat. It nearly had the rear wheels rubbing the wheel arches.

I made the ferry in good time and just to pay testament to the ‘it’s a small world’ philosophy, the guy behind me in the queue to board was the same guy who was at the hotel in Santander (just three guests) the night before I brought the Land Rover home in January. He’s a parachute instructor who works near Seville and since we last talked he’d walked out of a catastrophic plane crash. Not the kind of story that you want to be able to better. 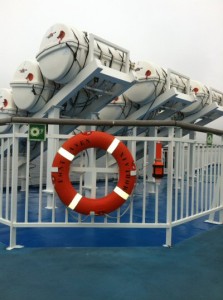 The sailing on the Pont Aven was uneventful apart from the inedible food from the self-service cafeteria and we docked on time after sailing over what felt as though it resembled a mill pond.

Customs left me alone at both ends, which was very wise considering how many of us it would have taken to lift the fire out for them to check it, and the drive from Santander to our friends Stephen and Kay’s newly finished barn conversion near Trabada took just under four hours. I did, of course, observe the ever fluctuating speed limits after learning an expensive 400 Euro lesson last time. 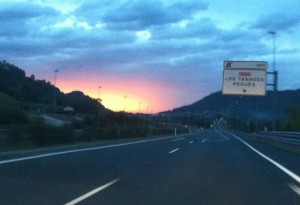 Stephen and Kay’s’ barn is nothing short of delightful. The attention to detail is stunning, the craftsmanship of the highest quality, and the overall comfort is like slipping on your favourite pair of well-worn slippers. The building wraps you up and it’s location is other-worldly. A constantly re-topped glass of wine and some delicious tuna lubricated and fuelled discussions, which went on until 3am.

I was up to watch the dawn, at a very civilised 8:30am, and see the mist lift to reveal dew laden fields as cockerels crowed and cows mooed.

An external inspection of the barn and newly renovated bread oven house (horno) and grain store (cabazo) showed that there was no skimping on quality there either.

When I got to Lineiras at 11:30 this morning to meet Facundo it was evident that they hadn’t started work yet, and that nature had once again begun reclaiming the site with an abundance of weeds and tall grass. All the fruit trees were empty of their bounty, evidence that Carlos had once again taken our crop for himself.  The new zinc guttering looks great and the re-finished balcony has stood up well to the summer.

Work is now re-scheduled to start on the 7th November, which suits me fine as I am back in the UK for a week starting next Tuesday. Facundo is predicting that the works will take about a month, but the elapsed time will depend on the manufacture and delivery of the windows which are needed to make the place water-tight before first fix electrics and plumbing can be installed.

I will use Friday, Saturday and Monday to choose bathroom sanitary ware (with Facundo tomorrow), flooring, liaise with the carpenters over the windows and doors, and go to Ribadeo to pay some bills.

It feels like I’ve never been away, and my Spanish is coming back to me pretty quickly. Shout and wave your arms…it works every time.

This entry was posted in The House in Liñeiras and tagged 13, Asturias, Barn, Casa Lineiras, Neighbours, Roads. Bookmark the permalink.