The rude awakening and the wooden Grand Prix

My rude awakening by the piercing shrill of the Spanish mobile phone (I must change the ring tone), at the unearthly hour of 9am, was instigated by Facundo; calling off this mornings planned trip to look at sanitary-ware as he had to go to Lugo. I’m sure he explained why, but still half asleep my rusty Spanish couldn’t keep up.

One of the other essentials on this first weeks trip of the new building season was to visit our solicitor and collect the Spanish equivalent of the Council Tax bill which needs paying before the middle of November. Failure to do so will undoubtedly mean a fine which will be disproportionately and outrageously large. This year the annual bill has increased greatly as the barn is now registered as living space, rather than its previous status as a ruin.

This year I have had to pay 64.80 Euros, yes that is just over £50, for the entire year. I don’t really begrudge it especially as they have totally re-surfaced the road for the three kilometres leading up the house. While I was most appreciative when driving it for the first time yesterday, the cautious side of me did immediately consider how dangerously slippy it will be when there is the first touch of frost this winter.

Once our debts were settled for another year, and a direct debit set up for future years, I decided to call on the carpenters that we have commissioned to make our windows and doors. We’ve gone for Iroco (more durable and slightly cheaper than the ubiquitous chestnut) but after seeing some windows locally which looked more PVC than wood I wanted to be sure that ours would have plenty of character.

Our previous contact, Mari Luz, was absent but I got talking to Alessandro, who I suspect is the boss, or at least acted like he was. After my initial spluttering attempts at Spanish he knew who I was and we talked through the quote, arranging for him to come to the house on Monday morning and measure up so that the manufacture process can begin. After giving him directions to the house I asked if I could see some examples of the wood and the windows and doors and he took me deep into the bowels of the factory and then outside into the garage under his house. 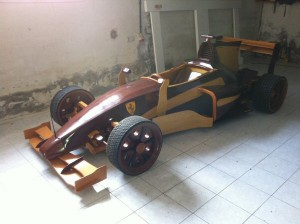 The BMW 535i and brand new M3 signalled to me that there is a probably a bit of money in windows, and as we went round a corner in the vast garage, he showed me something most unexpected. There, varnished, polished and shiny, was a full size Formula One car made entirely from wood, by Alessandro’s own hand. Any worries I have about his workmanship or skill were instantly allayed.

This thing was fantastic, all wood except for the tyres, with a working steering mechanism, suspension, and a steering wheel which detaches from the top of the steering column just like you see Jensen Button doing as he crashes out every other Sunday.

Behind this one was another smaller F1 car (his practice) and yet another ¾ size wooden saloon car wholly made in various varieties of wood. 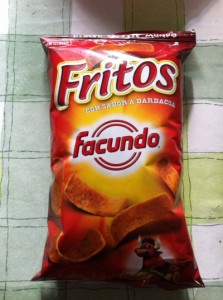 A quick stop at the supermarket for provisions where I stumbled across a new potato chip that I’d never seen before, and I had to buy a pack.

They are called ‘Facundo’, the same name as our builder. Facundo actually means eloquent, which isn’t a great name for a crisp in either language.

Perhaps that is why we’ve had to wait for October until he started work, he’s spent the summer perfecting the new crisp that bears his name.

Having sampled ‘Facundo’ for lunch, all I can say is that he’s a much better builder than he is snack maker!

As I write this Ramons internet isn’t working, but I have absolutely no grounds to complain as he is allowing me to stay in his apartment for nothing. What it does mean is that to use the internet I have to buy a beer or two at the wi-fi hot-spotted Hotel Taramundi, it’s such a hard life that I lead!